Hoooowdy! I’m back for another rootin’ tootin’ good time at Whispering Canyon Cafe. It’s been a while since I visited last and one of the biggest reasons I wanted to head over this time was to check out the newly revamped dinner menu. I’ve been to lunch since the menu was revamped and you find find that review HERE. I also wanted to catch up with one of my favorite chefs on Disney property, Chef Williere. Words can’t do him justice–he’s just awesome! 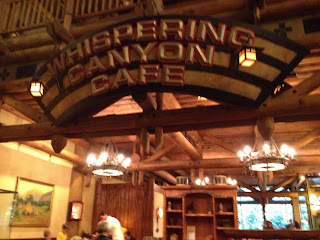 My family came with me for this meal, and we were all VERRRY hungry, having spent an afternoon moving my brother into his new apartment. Family style places are a great place to scarf down after a long day of moving boxes!

Upon arrival, we all got ourselves some cool beverages. Really, we should have asked for the big Mason jars because let me tell you, we sure drank enough iced tea and soda. While getting our cool drinks, we looked over the menu. I knew that the entree choice was the family style platter. It gives you the choice of picking out 3 different meat choices including:

From the meats I remembered, I had a sense that the ribs were safe as was the chicken. For sides, you don’t have to choose but you get:

Chef Williere came out, and we chatted. The restaurant was swamped so I can imagine how crazy the kitchen was, plus he was at a lot of tables to assist. Who knew Sunday was an oddly busy evening there. He went over the meat options and said everything was gluten free & dairy free, except the fish. This is due to the crust that they top the fish with. However, Chef Williere could make it plain without the crust. Our table went with the pulled pork, ribs, chicken and fish. As far as the sides, everything was safe except the mashed potatoes which had dairy in it. Aw bummer. I really really liked those herb crushed potatoes from the last time we had a skillet (before it became the platter) there. Instead my option was plain rice. Really, in the end I didn’t need it because I had so much other food to eat. The good news was that they still have the allergy friendly cornbread–hallelujah!!!

First up, came the cornbread. Yum. I got a nice big piece and I swear my family was eying my cornbread the whole time. I did give my family some samples, including my brother & sister-in-law who hadn’t tried it before. They actually really liked the cornbread, saying it was more “cornmeal” flavored that the cake cornbread that they had. I should have asked for more 🙂

The one thing I will say that I actually missed from the old “skillet” days was the salad. I really liked the salad with apple vinaigrette. It made for a nice refreshing appetizer before the big meal. But as long as the cornbread stays, I’ll forgo the salad!!

Then onto our platter. The meats, except the fish, were all on one platter. The corn and veggies were on another (all safe for me to eat). The beans and potatoes were in separate bowls, so I was able to easily avoid the potatoes.

So, I have to apologize for the lack of composed photos. I sort of realized I forgot pictures mid-way through the meal. Whoops. This is what happens when you are REALLY hungry. First up, the veggies. I don’t eat corn on the cob–it’s a Crohn’s thing. Really messes my stomach up. But the family said this was good (and they ate it all). The green beans and carrots were good but very crunchy. Another Crohn’s no-no. I tried a little bit didn’t want to push it. The bbq baked beans are also a little firmer than you might expect from baked beans, but I do like the bbq flavor.

I have to say, my favorite part was the meat. I know if you are vegan or vegetarian, they can offer you the quinoa cakes still but in reality this place is kind of a meat-lover’s paradise and maybe not the best veggie choice. The pulled pork was actually my favorite because it had a nice smoky flavor (and it wasn’t sauced–this is key in pulled pork). The ribs were good. I’m always on the fence with ribs, but I liked these. Still, they are a lot of work for little in the end in my opinion! I’m not a fan of messy eating 🙂 The herb chicken was my second fave of the evening. I really enjoy the rosemary flavor on this. I ate a couple of pieces of this. The fish was also good. It was very fairly plain–some type of cod or tilapia seasoned with salt and pepper. But it was cooked properly. That’s very much the key to good fish. (and something I constantly screw up at home). Chef Williere really loaded me up with food options, so I walked away from this meal stuffed.

And then it was on to dessert. Last time I had a skillet, we had a really lovely chocolate cake that the bakery had specially made for us. This time, I was glad that Chef Williere had a lovely sorbet for me. It was one of those perfect palate cleansers at the end of the meal–not too heavy, light tasting  and yummy. It was raspberry sorbet, with a raspberry sauce, fresh berries. After seeing the dessert sampler my family got I think they were wishing they had the sorbet! They liked it but they were very very full.

Overall, I liked the new platter. I admit, the old skillets tug at my Disney traditions and heartstrings. I miss them as much as I miss the lazy Susan skillets at Ohana. But, I do realize that change is good in restaurants in order to keep them fresh, current and vibrant. There are a few things I missed (like the salad) but overall, I think Chef Williere and the team have done an excellent job of updating the menu without losing the heart of Whispering Canyon Cafe. Most of the meats are the same, just a few changes here and there.

I’d give this a solid 8 out of 10 and will definitely be back again to say hi to Chef Williere and the rest of the gang at Whispering Canyon Cafe!