Nestled far in the back of Saratoga Springs lies Artist’s Palette, the quick service location for this resort. Inspired by the actual Saratoga Springs, this location offers a lot of “standard” old New York State flair. You’ll of course find Saratoga Chips (or just regular potato chips essentially) with all of the meals. As a quick service location, I was interested in trying many of their sandwiches which sounded both delicious and easily made GF/DF.

If you have never been to this resort, Artist’s Palette seems like a weird location. It’s sort of in the back, as is Turf Club Bar & Grill (which I love as a GF/DF dinner option). I always feel like I’m parking out of the way and find it very hidden. If you know where the boat docks are at this location, then you are fairly familiar with the restuarant locations. The first thing you’ll notice about Artist’s Palette is that it’s small. I mean small. Tiny compared to most other quick service locations. There is limited seating inside & some outside. There’s also an alcove by Turf Club that can be used as additional seating which is where I ended up. Lovely actually but kind of out of the way (we’ll get to why in a minute).

When I got to the ordering station, I noticed there is one main line. Yikes! That means it’s hard to navigate for starters and also a big difficult with a special diet. I basically waited in long line, so I could wait some more for a chef. But, that’s something good to know if you are dining there. Off-hours are probably less difficult. There are a lot of different types of sandwiches here and I was sort of eyeing:

I figured that either one might be able to be easily modified GF/DF. I was leaning towards the Lobster Club because I’d been craving one since I went to Columbia Harbour House and they mentioned that the lobster salad there was safe (just no bun options!). When the chef came out, she seemed a bit ambivalent. She was like, “We can make you flatbreads.” Really, I was not in the mood for a flatbread and let her know the sandwiches I was looking at. I told her that the lobster club sounded really good. She said they had Udi’s on hand and that they could give me potato chips but not house-made ones. She really wanted to push me along, so I didn’t get much out of her in terms of other options. But, I can imagine with the right kind of chef here, you could get a fair amount of interesting choices.

Once I ordered, I was given a pager, which all guests are. You also get a number placard, this way servers can bring the food to you. I thought this was a very interesting route. I thought it was especially interesting because I couldn’t find a seat in the main room and had to go way down the hall to Turf Club. I was like, “um how are they going to find me?” and a cast member assured me it would be fine. However, I ended up coming back up to the front because I was nervous they wouldn’t find me. Thankfully, this worked out ok because the cast member brought my food out fairly quickly. I was glad to see it marked “Allergy” on the box so that cast members were aware this was a special diets meal. 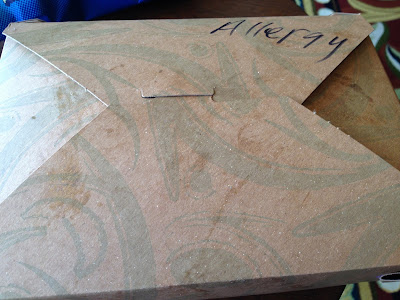 Once I got settled, I opened up my box. And I was surprised to see not one but two sandwiches. That was a surprise! Holy smokes! I also have a really big bag of pre-packaged chips, as they house-made chips were not safe. This was definitely going to be a lot of food.

I have to say that this sandwich…or should I say sandwiches were not was I was expecting. I expected something a little lighter and a little more lobstery (in taste not necessarily portion). What I found was that the flavor you tasted the most was Old Bay Seasoning. Don’t get me wrong, I like Old Bay (and it’s GF!) but it really overpowers and this was almost a little too much. I found that had they just used a little it would have gone a long way. I mean, I really couldn’t taste lemon mayonnaise. Overall, though I did like it. And two sandwiches was a lot. I def. was full. The one disappointment was that they couldn’t make the chips GF/DF. Or at least some fries. It may be that they can do the fries but I wasn’t able to get them because of the chef interaction. Either way, the chip option was just OK. 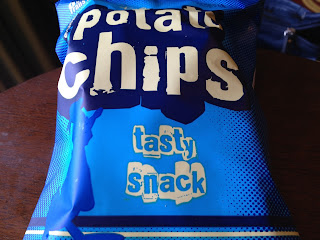 Overall, I wasn’t wowed by my lobster club sandwich, but I didn’t hate it either. I think if I were to visit this location again that I would probably go during an off time. I’d give this a 6 out of 10. Lackluster food & so-so service and accommodation.

I’ve had quite a few people recommend Saratoga Springs’ table service restaurant Turf Club Bar and Grill. Everyone I’ve received the recommendations from have told me how wonderful this restaurant is at accommodating special diets. For me, I’ve never been likely because I have felt it was off the beaten path, and I’ve also never stayed on a vacation at this resort. But, I really wanted to try something different on my way back from MCO airport, so I decided to check it out.

One of the first things I noticed about this restaurant is its options for outdoor seating. Although I opted to stay indoors due to the heat, I thought this would be a perfect place to have a leisurely lunch or dinner on a cooler day. It has spectacular views of the lake and of Downtown Disney.

After being seated inside, I was greeted by the chef, who went over the menu with me. He said there were a lot of options, and he was correct. I was pretty pleased that I had such a variety of entrees to choose from. Appetizer-wise, there wasn’t really anything short of salad that was gluten free and dairy free. He did mention the buffalo chicken dip is gluten free, but contains butter (so those of you who are strictly GF can enjoy this). For entrees, all of the burgers were good. The chef said he could do a modified GF/DF version of the shrimp scampi pasta. The crispy chicken breast sandwich could actually be made with the crispy coating. (yes, I was sold on this one!). The Reuben sandwich was ok, as was the barbeque pork tenderloin sandwich. There were a few other options, but I sort of tuned them out once I heard the crispy chicken was safe! I ordered mine without the goat cheese or the rosemary focaccia. Instead it came on a Udi’s roll (I still am obsessed with these. Thank you Udi’s for making these!). I also got the french fries.

I must say, this sandwich was to-die for! As you can see, it was quite large. I actually had to cut it in half to eat it. The GF/DF coating was actually very crispy, as well as being very tasty. My only slight suggestion was to add a little more salt to the breading, but otherwise, it did an excellent job of creating that crispy chicken sandwich taste and texture. I don’t think I’ve actually had a sandwich like this since going GF/DF over 3 years ago (chicken tenders don’t quite count). It was fantastic. The balsamic marinated onions and tomatoes were very good. I loved this. The arugula was a nice touch for the choice of greens, mixing well with the balsamic dressing. Believe me, I scarfed this down. The fries were good. Nothing spectacular, just plain old good french fries. Next time, I might try the homemade chips. I know the slaw they had was not mayonnaise based, and the server mentioned that it was a sweeter slaw. Not sure I’d do that, but it might be a good option, if you like slaw.

I also decided to get dessert. The sorbet flavor that day was mango. The chef said they would add some fresh fruit. I like the mango sorbet a lot. It’s something different than the traditional raspberry, which I get a lot. Although there wasn’t a lot of fruit accompanying the sorbet, it was all very fresh and very tasty.

Overall, I was pretty impressed with this restaurant. They really did seem to have a lot of GF/DF options. I was especially impressed considering that my lunch was a walk-in, having not made an ADR. So, this is a great option regardless of advanced notice (but definitely make an ADR whenever possible). I didn’t get to meet Chef Ron, who I’ve heard a lot about, but the other chef on duty was fabulous.

Definitely a solid 9 out of 10 for excellent options and service.