This used to be one of my favorite restaurants for allergies. My mom really wanted to go here for her birthday dinner, so I was more than happy to venture out to the AKL. Unfortunately, a series of unfortunate events began to occur through this meal, and I was very very sick by the end. Not good. To begin with our waiter was very argumentative. He did NOT want to get the chef. He wanted to tell me what I could and could not eat. *sighs* After insisting on talking to the chef, he huffed off and got him. Chef Josh was one of the youngest chefs I’ve encountered. He was friendly enough, but not as knowledgeable as he could have been. I asked about the dip sampler, which he said he would check all of the sauces for me (last time I had a marsala sauce that was not safe…we’ll replay this in a minute) and bring pompadams. This was fine. As far as the entree, I really wanted the curry shrimp, which I had the last time and was good. However, he kept saying that coconut milk was dairy, which it’s not. I was getting seriously confused. He offered me a vegetarian option and a fish option as well. I decided on the shrimp. The waiter came back and was very rude, he asked, “so do you feel better now?” which is a perfectly fine statement, but the tone was soooo rude. Then he brought out the dip sampler and gave me my own dips and my mom and stepdad theirs. 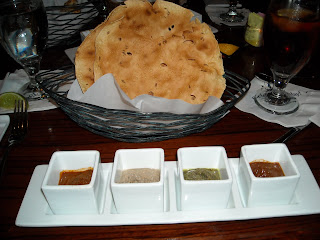 Dip sampler and pompadams…the one on the far left is the masala, which I gave to my mom. The far right is the one that made me sick and was horribly spicy.

However, I had the exact same dips as them. I asked what they were and the one was the masala dip (same as the time before) and I explained to the waiter that this one was NOT dairy free on the last trip, and was he sure this was right. He snapped at me and said that the chef checked and that it was fine. I took a couple of bites of it and ended up giving it to my mom b/c I was pretty sure there was dairy in it by the taste and my reaction to it. I ate a hummus and spinach one which seemed very good. Then I tried another one which was spicy and sweet. It did NOT go down well. I stopped eating it b/c I felt bad after I consumed it. Not good. I don’t think it was necessarily allergic reaction but perhaps crohn’s related. In any event, they bring out our entrees and my shrimp dish looks very concentrated–the sauce is very dark and no coconut milk is in it (how many times did I have to say coconut milk is not milk). 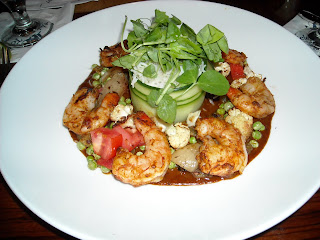 This entree looks pretty, but the taste was so concentrated and strong, that I couldn’t eat it.

I took 3 bites and nearly got sick. It was the same sauce that made me sick previously…and worse, it had reduced b/c of how they simmered it. It was awful. Even my family said it tasted terrible. Now, I will say that I have never ever in my life sent something back. Never. Even if I didn’t like it I would eat it. This was so bad and I felt so sick that I had to send it back. The waiter was really mad at me. I felt terrible too and apologized over and over. I really hated doing that. The chef then came out and he said he wasn’t sure how it was going to taste b/c he omitted the coconut milk and that he thought it would be really intense. Um, ya think?! I decided to go w/the tilefish b/c it was supposed to be mild. It was. It was just a nice maize crusted fish with a light broth and plantains. A much better choice of entree. 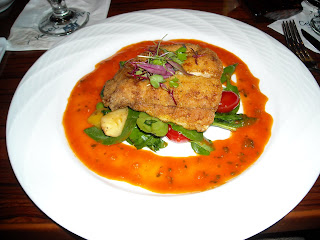 The chef was at least nice enough about it, but the waiter got madder and madder at us as the night progressed. He seemed irritated that we didn’t order alcohol or any desserts, etc. The worst waiter I’ve had on Disney property ever. It was a bummer too b/c the meal could have been so nice, but the waiter brought everything down. I ate my fish, but I was really sick by the end of the meal. I felt terrible all around. Overall, it was a pretty unfortunate meal. I know that they have a new head chef there and that the menu has changed quite a bit, so I think it will be a long while before we head over there again. Overall a 4 out of 10 for bad service, lack of allergy knowledge and lackluster food.

This was the most amazing dip from Jiko. They served it to me with the dip appetizer as a replacement for another dip that had dairy in it. It actually turned out to be our most favorite dip of the evening! My mom also had the chermoula chicken which had this as a sauce. It’s really flavorful and a bit spicy. Very yummy! I attempted to make the recipe for it that I found on allearsnet.com. I modifed it by adding an entire roasted red pepper (which I did on the grill!) and omitted the cayenne. Good thing, too! It came out a wee bit spicy. We ate it with tortilla chips, and yes, it got gobbled up fast. Here’s the recipe! Enjoy!

I asked Brenda Bennett for the recipes to the dips served at Jiko on my last visit (see my review for pictures of the dip sampler); however, it looks like they are not made in house (bummer!). They did tell me the vendor information, in case I wanted to order them. Here’s what Brenda wrote me:
“Unfortunately the dips are not made in house. They are from a vendor called Greek Island Spice.”

Here’s a link to their website: http://greekislandspice.com/c/index-c.htm
I’m not sure that I would order anything, but it is nice to know that I could “recreate” my Jiko dinner, if I wanted to.

If you have the chance to eat at Jiko, you should! It is simply amazing. A stunning restaurant, not only is it beautifully decorated (the lighting even changes to reflect the sunset!) but the food and service is phenomenal. It is now one of my favorite restaurants at WDW, and I’m sure it will continue to be for years to come. Upon arrival, I made sure my restrictions were noted on our reservation. After being seated, I had to mention it to the server Sassan, and he said he would get the chef. He said that they do wonderful dietary foods there and that I would have a great meal. A few minutes later the chef arrived with a menu JUST FOR ME! Ok, it was a pre-done menu for lactose intolerance, but still. It was nice to just look at the menu and pick what you wanted, not ask for substitutions. The chef said that everything but 1 item was GF on the Lactose free menu. (*Note: this menu did have goat cheese on it. I am lactose intolerant, but tend to just do CF as well; however, I can tolerate goat cheese and such, but I just rarely eat it. If you are CF you will most likely get a special menu for that…although honestly goat cheese was only in 1 dish everything else seemed truly dairy free). I decided on a dip sampler as an appetizer (as they could do pampadams instead of the bread basket and a chermoula dip in place of the marsala that typically accompanies it). My mom and I shared this, so they brought out a separate bread basket for her and a separate one for me. They brought out all three dips and the marsala separately for my mom. I will say this was very impressive. We didn’t ask them to do that, and they said they wanted to make sure everyone was taken care of. Now, if you have a child who is GF/CF and you also eat that way (so that no one feels bad, etc.) you would probably want to mention that so you don’t get tons of bread at your table. Me, I am perfectly fine with my own and others eating gluten and cheese as long as I get something tasty and wonderful too! Here’s the dip: 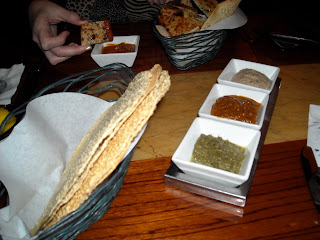 You can see my stuff in front and my mom’s stuff in the back. So, good she even is in the midst of eating it!

On to the entrees! I choice the Swahili Curry Shrimp (made with coconut milk) and it was fantastic. I could not believe how large of a portion it was. Their were 12+ very large shrimp in it. The rice and sauce were extremely tasty and the shrimp were out of this world! I highly recommend this. 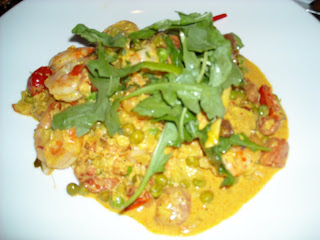 I had the option for fresh fruit and sorbet for dessert, but I was too full to eat anything else. I did, however, get some Rooibos tea (it is said to have great anti-inflammatory properties, very good for Crohn’s disease) and Jiko has a great tea menu. Here’s my pot of tea: 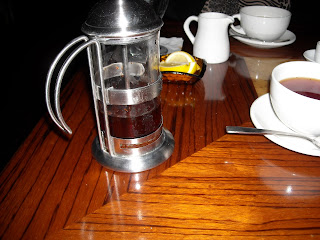 What a wonderful dining experience and an amazing meal. An excellent choice for dietary restrictions and for everyone else too! 10 out of 10.