Be Our Guest Restaurant at Disney’s Magic Kingdom (as of 5/2019) – This menu covers the top 8 common allergens (gluten/wheat, milk/dairy, egg, soy, peanut, tree nut, fish and shellfish). Check with the restaurant for modifications and/or other special dietary needs.

Gaston’s Tavern located in New Fantasyland is something truly out of the animated film. They say, he uses antlers in all his decorating and boy is that sure true. From the exterior of this quick service restaurant to the interior decor, it looks like a hunting lodge and tavern all in one. While I can’t say I personally love Gaston’s decorating tastes, I do enjoy some of the items served in Gaston’s Tavern.

On this particular occasion, I stopped by to try out the roasted pork shank and Le Fou’s Brew. I actually hadn’t been since the opening of New Fantasyland (during the annual passholder preview, actually!), so it had been a long time. On that first visit, I tried both, and I even got a chance to see the bottles and ingredients, thanks to a kind manager there. You can read more about that in my original post.

But back to today’s visit, when I entered the restaurant, I notified the cast member that I had special dietary needs. She then went and got the special diets binder and a manager. She gave me permission to take a photo of the binder cover, as you can see it here.

In looking at the ingredients binder, I noticed that the roasted pork shank (made very simply with a few spices) was made using Badia brand spices, which were listed as certified gluten free. I always like when I see Badia listed because it’s one of the brands I buy for my own kitchen.

You can see detailed info on my original post about Le Fou’s Brew and also on Gluten Free in Orlando’s website. The mango foam on top is really quite good and has that creamy texture that is often lacking from dairy free items. Thankfully, no dairy there!

As far as taste goes, I have to say Le Fou’s Brew is way to sweet for my tastes. It’s seriously sweet, and I found myself wishing Disney would offer a smaller size version. I really like the topping but halfway through the drink, it just felt super heavy to me, mostly because of the sugar.

The roasted pork shank, on the other hand is just delicious. It’s a little pricey at $9.79 but still delicious. (Fun fact: In December 2012 it was $7.99, so there’s been a definite price increase on these!) My family says they prefer it to the turkey legs these days, which surprised me a bit. But, I have to agree with them. It’s simply seasoned, slow roasted and delicious.

While there may be a few snack items that are gluten free and dairy free at Gaston’s Tavern besides the pork shank and Le Fou’s Brew, most people come just for these two items.

I have to say that it’s a great little spot to rest and enjoy a snack, though I wouldn’t make it a must-do every time I go. The pork shank I would absolutely get again. The Le Fou’s Brew I might again but split with someone. The sweetness just overtook this drink for me.

Have you been to Gaston’s Tavern? What did you think of Le Fou’s Brew?

*This dining review took place in October 2012 during the “Dress Rehearsal” and Preview period for the New Fantasyland Expansion.

Wow, here it is the official first view I’ve had of the New Fantastyland Expansion. I was lucky enough to be at WDW when a “dress rehearsal” i.e. pre-preview period opening occurred. We took a chance on visiting thinking it might be really busy (it wasn’t as bad as expected) and wanted to see if any of the restaurant choices were open. Be Our Guest Restaurant was not, but luckily the new Gaston’s Tavern was. A quick service with mostly snack items, we wanted to specifically check out the new LeFrou’s Brew the signature drink which many have been comparing to the Butterbeer from the Wizarding World of Harry Potter at Universal. I was intrigued, especially since the Butterbeer is gluten free but not dairy free. So we decided to pop in.

First up, I asked for a manager who came over while we were in line. He explained to me that because we were in the “dress rehearsal” phase, they were still refining some of the food and not officially giving out ingredients and did not have an ingredient binder on hand either. But, he said he’s tried to help if he could. I explained I was most interested in the roast pork shank and the LeFou’s Brew. He said that the roasted pork shank was made with olive oil, salt, and pepper, and then roasted but he again didn’t have that ingredient sheet with him. He said it was possible they had changed the “recipe” without telling him too. Seemed like it was probably going to be a turkey leg scenario of ingredients.

My mom and step-dad decided to try the pork shank out, and I tried a bite. It was definitely nothing major in terms of ingredients, it tasted like just pork, salt and pepper. I don’t think this one was heavily processed in terms of the ingredients. I will say, it was puny! For $7.99 it was not worth the price in my family’s opinion. In fact, we all said you could spend the extra $1 or $2 for a turkey leg. Much more substantial and flavorful.

The other item that the manager and I discussed was the LeFou’s Brew. He said he knew for sure that it was dairy free (still not 100% comfortable with that since he gave no binder listing) but he didn’t know about the gluten free part. He actually offered to bring out the ingredient bottles for me to look at! This was great, as I knew this would help me determine its safety or not. First up was an ingredient for the topping called Fomz. Um, this is weird. It’s like whipped topping but not. My major concern came in the area of “natural flavors” on the ingredients list. I’m still not 100% certain after a web search, but it looks like it is dairy free according to the Fomz site and gluten free according to some others. Still, I would check the binders and do some additional research before I felt confident in this one.

Next up was the toasted marshmallow syrup. This is what is mixed in with the 100% pure apple juice which according to the manager was Mott’s brand. According to the website for the syrup, this is gluten free & dairy free. So, based on the ingredients, I decided to give it a try. It was really tasty. A slushy frozen apple juice concoction. Though the foam was weird, it was good. Oddly marshmallowy in texture. I did find that I got wicked brain freeze from drinking it too fast. I will note that I only drank part of it and not the whole thing. And I think I had some latent stomach discomfort. Still not sure if it was the ingredients (felt very overprocessed for me; I don’t do that well with highly processed stuff) or the temperature because it was almost instantaneous brain freeze every time, so I imagine my stomach didn’t feel so hot. I did eat lunch after this and I felt much better after I ate. I also didn’t feel sick later in the evening, so I’m wondering if it was a combination of things more so than the gluten free/dairy free issue. Still, I would check the binders once they get them out to confirm GF/DF status. I might try it a second time if it’s deemed 100% safe just to see if the tummy troubles were a fluke or related to something else. (highly possible with Crohn’s!)

In terms of the other options, mixed fruit cup might be ok, though I didn’t ask about it or see it. The mixed vegetable cup with dip might also be ok for just GF folks, though I’d ask. I did notice that all of the other items except the croissant and cinnamon roll were prepackaged items, so I would definitely double-check.

Overall, it seems like there might be a few options at Gaston’s Tavern and that the LeFou’s Brew looks highly likely to be gluten free/dairy free. It’s definitely dairy free which is a leg up from Butterbeer, which as I mentioned earlier is not. This will make a highly desirable item for those of us who can’t imbibe in the Harry Potter favorite! You can also get the brew in collector cups for guys and gals, though at a steep $9.99 a pop!

A 6 out 10 until I more know about the ingredients.

Here’s some other fun pics of the location: 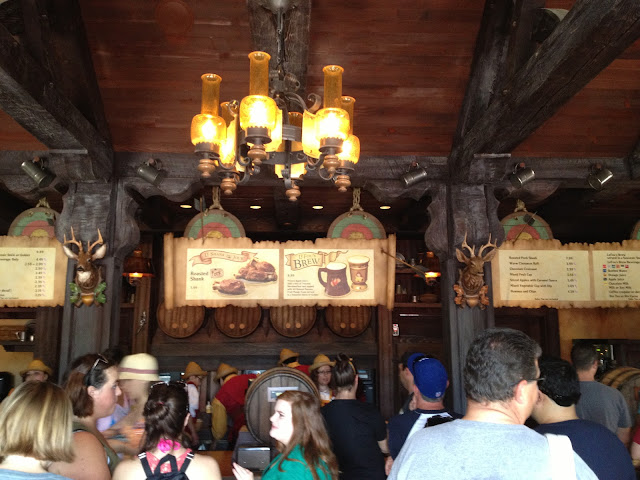 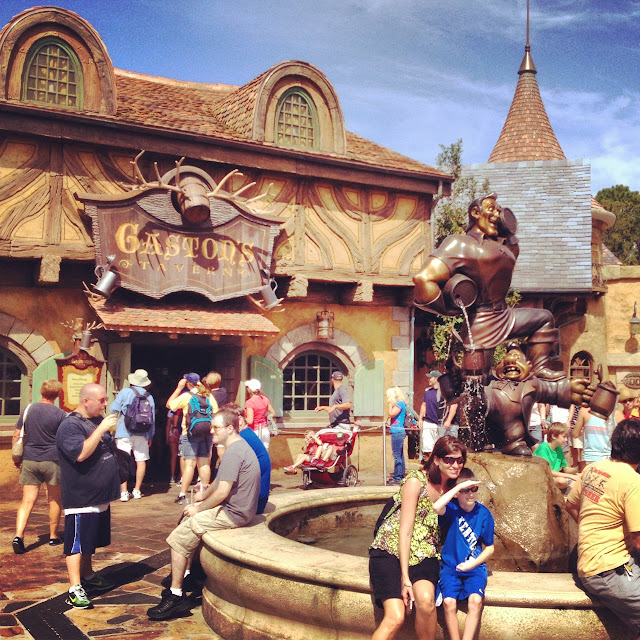 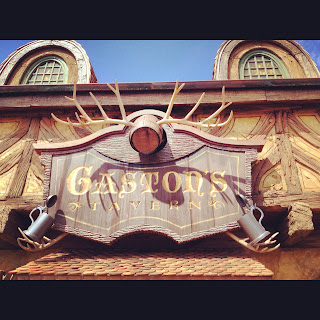 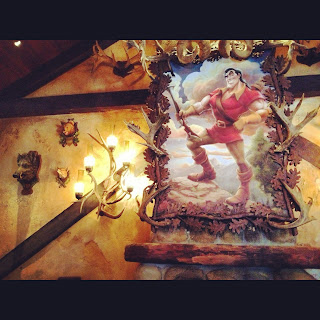 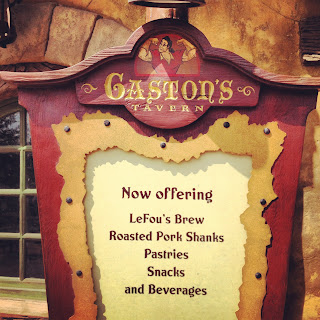 The items above have remained the same, and both the LeFou’s Brew & Pork Shank are GF/DF.
This location also now has Kikkoman Pearl Vanilla & Chocolate Soy Milk but I would hesitate to consume this based on Kikkoman’s own statement on their website:

PEARL Original Organic Soymilk is sweetened with malt syrup which is derived from barley, so it contains gluten. PEARL Coffee, Chocolate, Creamy Vanilla, Green Tea and Unsweetened Soymilks do not contain ingredients that are known to be a source of gluten, but they have not been tested to confirm they are gluten-free.

A totally different type of gluten free roll was o

Eye spy! An artistic, up close shot of Cactus cour

A simple but tasty salad from Hollywood & Vine in

Terrible photo but a surprise dinner hit from Holl

A massive amount of tasty food from @yakandyeti_di

The Wave at Disney Contemporary Resort always has

If you can have dairy, the crispy cheddar burger f

Wow! @pikaroth and I were blown away by the @skywa

Just a little purrito aka Wyatt to brighten your d

A few gluten free bakes from the holiday weekend.

Fondue is always a the best. We finally made it ba

Happy Caturday from a very spunky Wyatt! 🦁He ca

Gotta love a fresh salad! 🥗 The salad from Gard

A great entree modified to be gluten free from San