Pepper Market at Disney’s Coronado Springs is a fast casual location hailed as a quick service. On a previous visit, we had a server but on this particular visit during the Food Allergy & Celiac Convention, I stopped by later in the day 10 p.m. and found it to be like a traditional Disney quick service where you picked up your own meal items and paid at a cash register.

The last time I visited Pepper Market was August 2013, and I found the food to be pretty unappetizing. Normally, I would have probably avoided this restaurant but with it being so late and the evening before FACCWDW, I really didn’t have time to be too choosy.

When I arrived, I saw a manager and a chef and let them know about my dietary needs. They were pretty aware that the Food Allergy & Celiac Convention was happening, and I’m glad they seemed to be a bit more at the ready than on my previous visit.

I really wanted just plain allergy chicken tenders and fries and asked the chef if they had those on hand. He said they did have chicken tenders that were gluten free and dairy free (and used a dedicated fryer) and went to prepare them.

When he returned, I was surprised to see a version that didn’t look anything like the ones normally served on Disney property (here’s a comprehensive list), and as I learned, because Coronado Springs restaurants are not Disney-owned, they carry completely different brands. I didn’t learn which brand this was, unfortunately.

Well, I can’t say I loved these chicken tenders. They were just bland. They were plentiful which was evident from my huge plate but really were not at all as delicious as the ones from Columbia Harbour House (which I love). It wasn’t a terrible choice but also not a great one either. Still, it was a vast improvement from the previous dish I ordered at Pepper Market.

Overall, I still think Pepper Market is a pretty weak choice for meal options at Disney. I would likely only eat here if I were staying at Coronado Springs or try to find other options. I hear Maya Grill is great, and I found Las Ventanas to be reasonably good so my hope is the other locations are much better. For now, I’m going to continue to look for better options elsewhere.

Have you been to Pepper Market? What did you think of this quick service location?

*This dining experience took place in November 2014 and includes my gluten free & dairy free dining review along with a review that includes: gluten, corn, dairy, tomatoes, apples and peanuts.

Disney’s Coronado Springs Resort has several dining options available to guests, including Las Ventanas which opened earlier in 2014 as a table service location that serves breakfast and lunch. The restaurants at Coronado Springs are not owned and operated by Disney and therefore aren’t my most favorite in terms of accommodations and offerings. However, I was able to safely dine at both Las Ventanas and Pepper Market while staying at Coronado Springs during the 2014 Food Allergy & Celiac Convention held at the convention center.

Blog reader and friend Kathleen was at FACCWDW coordinating the teen area at the event. She did a fantastic job with the area and offered so many great resources for teens and college students. She’s doing fantastic things at her college as a food allergy advocate and hosts her own blog at: http://soulfoodheals.com/.

I was so thrilled when she and her mom invited me for breakfast on the morning after FACCWDW, because it gave us a time to chat and catch up. Kathleen and her mom totally had the same idea as I did by going to Las Ventanas as a quick service breakfast wasn’t appealing to any of us.

When we arrived, we let the server know that we had special dietary needs. He then brought out the manager on duty who went over some options with us. While I would have loved to have seen a Disney chef, I was glad that the manager spent some time to discuss options with us and to ensure safety.

While the menu did note several dishes could be made gluten free (including steak and eggs, Huevos Divorciados, and Ventanas Breakfast) which was nice. Everyone at the table decided to go for the Ventanas Breakfast which seemed the easiest and best option for special diets. It came with two eggs any style, choice of peppered bacon or grilled ham, and green onion potatoes.

The manager advised us that the potatoes were made with extra virgin olive oil and contained no dairy, and the eggs short of scrambled could be made dairy free (my guess is they have pre-packaged beaten eggs, though I am curious how they can’t make scrambled eggs on the fly. Seems not that hard!). The manager also mentioned that they had gluten free bread, and both Kathleen and I wanted to see what brand so we could determine if it was safe to eat or not.

The brand used was Hilltop Hearth and was certified gluten free. It was also dairy free. Here’s a list of the ingredients from the box. Both of us ordered the toast dry, since they didn’t have any non-dairy butter options.

The breakfast itself was OK, nothing spectacular. I asked for my eggs to be cooked over-easy, but they were hard cooked, so someone missed that memo. I asked if I could have both pepper bacon and ham, and was served both. I love bacon, as you all know, so I was happy to see pepper bacon in a restaurant! The potatoes sadly were missing the scallions, but tasted OK. I can’t say that I loved the bread served but it wasn’t terrible either. It had a slight after taste, and I wonder if it was due to the chickpea flour or soy flour.

Overall, I think the meal was OK – solid and at least safe. It wasn’t as amazing as some of my favorite Disney restaurants, but it was a great option while staying at Coronado Springs. I also really enjoyed the company and found that to be the best part of my meal! Thanks to Kathleen and her mom for inviting me!

I can’t say that Las Ventanas will be in my regular rotation but I’d definitely go back again and see what other options might be available.

Have you been to Las Ventanas? What did you think of the special dietary options there?

Hosted by Gluten Free & Dairy Free at WDW and food allergy cookbook author, Laurie Sadowski, this event will include:

Coronado Springs has always been one of those resorts that I haven’t spent much time in. This visit, I checked out Pepper Market which is the quick service location at this resort. This is a non-Disney owned restaurant and run by the same company that owns & operates La Cantina & La Hacienda de San Angel. While the theming proved to be quite nice in this location, the gluten free & dairy free accommodations were less than stellar. In fact, this proved to be a restaurant that I will not go back to again.

When we arrived at this location, we noticed that it is set up very differently than other quick service locations (which I did know about ahead of time). You are seated by a hostess at a table where you have an actual server. You are given “menus” which give you an idea of dishes available and a ticket sheet for you to get stamped (a bit like a passport). Our server, who was the bright spot of this dismal meal, came over and cheerfully greeted us. She went over the restaurant concept, telling us that we go to the station we want. Choose the items we want. Get our passport stamped and then pay at the end like you would at a table service location (including gratuity). I told her that I had special diets and would need to speak with a chef or manager. 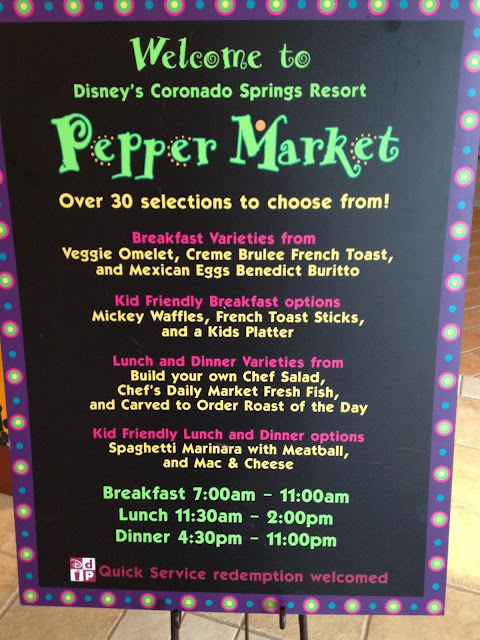 Once the chef came over, he talked to me briefly about the options. Basically, he told me I could have nachos with no cheese and my choice of the beef, pork or chicken. I could also have a “deconstructed” burrito with corn tortillas, the same proteins, beans, and the rice pilaf because the Spanish rice contained wheat. I could also have the carved roast of the day (which was something beef), fresh fish, or burgers with no buns. They said they had a fryer that they could use that was cross contaminated. It seemed like I had fairly limited choices. The chef also didn’t seem too thrilled with helping out. In fact, he pretty much took off once we went to the stations. I told him I wanted the “deconstructed” burrito with chicken. He went and got rice and had the cast member at the station take care of the rest. 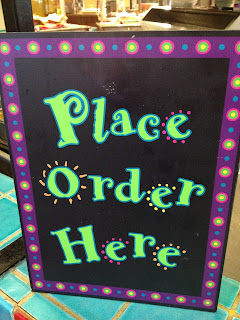 One of the things that he told me I could have was all the toppings were OK (guacamole, salsas, etc.) but as you know they are not great for cross contamination!

I really wanted guacamole, but it had cheese all in it. So, I asked for that and some salsa verde (as with cheese in it). They weren’t too thrilled about getting it but they did from the back. One of the things I noticed while waiting was how “pre-packaged” everything looked.

Once I got my food I went back to sit down. I will say that the restaurant itself is nice and open and spacious. 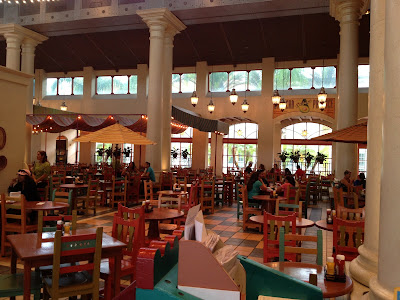 Then we got to my food. Blech. This didn’t look that appealing to begin with. Maybe it was just me. You be the judge. 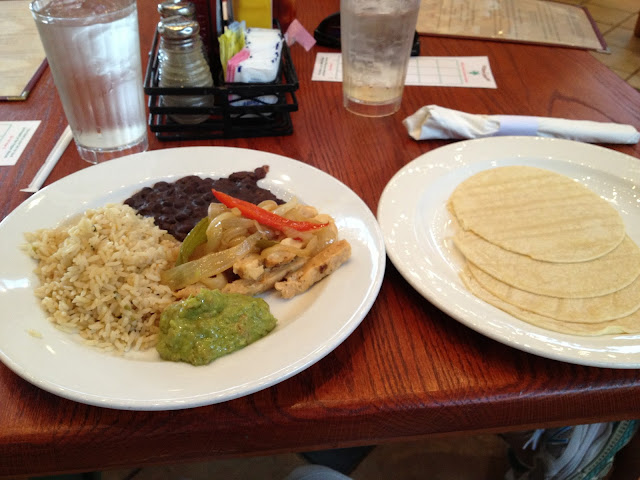 In general, I just thought it didn’t taste very good. It was 1) very bland and 2) very pre-packaged “out of the box” tasting. Even the guacamole tasted like that. The chicken was rubbery & bland. The rice was so plain. The guacamole was watery and barely seasoned. The beans were just blah. And the veggies were not fully cooked as they should be for fajitas. The corn shells were also griddled but as you can see don’t really looked griddled. 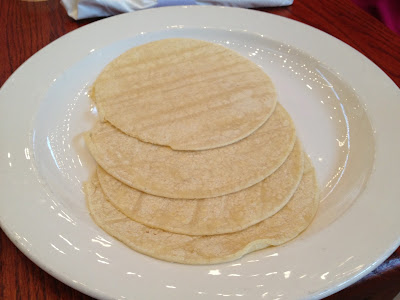 I didn’t take a pic of the salsa verde but it was horrible. I love salsa verde & I barely at any of this. It was just a bummer overall. I would have rather have eaten at Chipotle any old day over this. This was bar none the worst Mexican food I’ve had on property or anywhere for that matter in a long time. Just boring and unappetizing. 🙁

I was so shocked that the company that runs La Cantina & La Hacienda would run this. I love La Hacienda (La Catina is good but I’m sad they have no safe tortilla chips anymore). Just crazy! Perhaps Maya Grill next door has better quality food but overall I found this very unappealing. I mean, honestly, I can handle less than stellar experiences if the food is decent but this was just nasty.

I’m not planning on going back any day soon, and I certainly can’t recommend it to anyone in good conscience. Yuck, yuck and double yuck. This may officially be my least favorite place on Disney property (that I’ve eaten at).

Overall, I’m giving this a big fat 3 out of 10. The only reason it gets a 3 for me is because our server was so nice & they at least had a few GF options (mind you not tasty ones). Unfortunately, I was just not a fan of this place.