Chef Mickey’s at Disney’s Contemporary Resort (as of 4/2021) – This menu covers the top 8 common allergens (gluten/wheat, milk/dairy, egg, soy, peanut, tree nut, fish and shellfish). Check with the restaurant for modifications and/or other special dietary needs.

Wave your napkins in the air! It’s time to celebrate with Chef Mickey and the gang! It’s hard to believe it’s been over a year and 1/2 since I’ve been to Chef Mickey’s! My family and I decided to visit the morning after our annual Mickey’s Very Merry Christmas trip. We always stay at Bay Lake Towers, our home resort in DVC. It makes for a much more relaxing night, not having to worry about a bus. I love that walk back in the evening. And even better…I get to enjoy the Contemporary, one of my fav resorts. It’s classic Disney World! I love the monorail whizzing by and the hubub of the resort. It’s so much fun to enjoy a meal at Chef Mickey’s too. Makes for great atmosphere.

This trip, we had a very early reservation (considering we were up until 1am!) at 7:30am! I’ve never actually been to Chef Mickey’s that early, so I wondered how “busy” it would be. I’ve often waited in very long lines to check in. However, on this trip, it was very quite (yep, no one else wants to be up that early either!), and I kind of wished I had worn some PJs! We were quickly ushered in and took our mandatory photo in front of the Chef Mickey’s statue and giant plate (your family will be greeted by a Photopass cast member at your table with the photos, which you can purchase for around $30 and includes an 8×10 photo and some wallet photos–at 7:30am, we politely passed on that!). Then we were immediately seated. How’s that for early morning service?! The chef was also standing there, and he said he’d be right over.

Once seated, we ordered drinks, and then the Chef came by. He was really great. Of course, I managed to forget his name (I think it was Brian?)–too early! He took me around the buffet and showed me some of the options. There were I would say an OK amount of options. Fresh fruit, smoked salmon, eggs on the buffet did not have dairy, potatoes, breakfast meat, corned beef hash were all ok. The chef was very good though because he said that if I were uncomfortable with any cross contamination, he would make anything I wanted in the back. This I really appreciated because not every buffet offers this willingly. Luckily, since it was so early and a lot of the safe items were located next to each other, I went with a few things on the buffet. Chef also said he could make me allergy friendly Mickey waffles (hurrah!) and that they had Udi’s bread for toast, muffins (blueberry Kinnikinnick brand). I asked about Earth Balance, but he said they didn’t have any. He did offer Smart Balance, which I declined, but he went back and looked at the ingredients and said he thought they were safe (it’s vegan). I tried a little bit of it, but not much. I much prefer the Earth Balance. This tasted less ‘buttery’ than EB. The Mickey waffles were Bob’s Red Mill (my fav!) and pretty good. Not quite as crispy, as I would like, but still tasty. I love Udi’s toast, and was so excited to see it there. The Kinnikinnick muffins are good, though I prefer their chocolate chip muffins (what can I say, I like chocolate muffins in the morning!!).

Now onto the buffet items. I would say the food was OK. The eggs were actually overcooked (you know how eggs get that brown coating on them when they get overcooked, yep, they had it). I added some chopped ham from the toppings, but I would have much preferred an omelet (ohhh Boma omelets are the best!!!). The bacon was the typical stringy bacon you see at most locations at Disney restaurants. The corned beef has was interesting. I wouldn’t say bad or good, just OK. Certainly not the kind of hash I’m used too. I also don’t normally eat beef, so I got a very small amount of this. This was like having potatoes with slices of pastrami in it. Not the finely ground chopped hash I usually associate with this dish. Definitely an unusual dish. My favorite thing on the buffet were the breakfast potatoes. These were really yummy and nicely seasoned and a little spicy. Nothing overpowering but very good.

Of course, the characters are the big thing at Chef Mickey, and we sure made the round of characters. We got to see all of them: Chef Mickey, Donald, Pluto, Goofy (who I like more than Chef Mickey, sorry Mickey!!!), and Minnie. As bleary eyed as I was that morning, I opted for no pics, but the characters still got a lot of love from my stepdad who had never been to Chef Mickey’s before and got to take pics with ALL of the characters! Lucky him!

Overall, I like Chef Mickey’s for the atmosphere, but for food, it’s so-so. I will give the Chefs credit for being flexible and willing to help out. But the food itself was very cafeteria tasting and certainly not up to the caliber I expect for $30 per person (yes, $30 per person–it’s price has gone up since last I payed out of pocket!!). I would probably only come back for a special request from friends or family or if I were to score free dining. I’d much rather spend $22 and head to Boma for their breakfast. Still, it’s a great place for families to visit, and a fun overall experience even if the food isn’t all that great. It’s one of those visit every few years or so for me personally.

I’d give it a 7 out of 10 for great service and dietary accommodation but lackluster food. 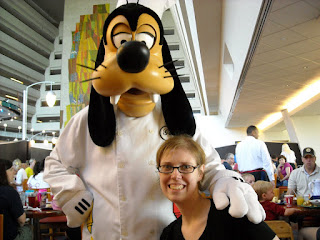 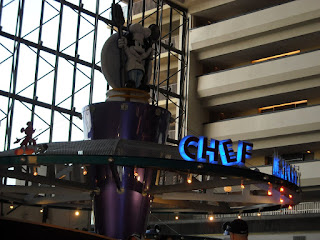 Wave your napkins in the air, it’s Chef Mickey’s!!

Ah Chef Mickey’s…one of my long time favs, but I actually haven’t been since going gluten and dairy free. I was looking forward to the breakfast and seeing what they had to offer. Since my tummy was still bugging me from the Crohn’s, I figured I still needed to take it easy. But even stomach issues wouldn’t stop me from those Mickey Waffles 🙂

We were greeted by Chef Les, who was very nice. He was very helpful and friendly. He said that they don’t use dairy on the eggs at the buffet, so I was able to eat those. I could also have fruit, breakfast potatoes, and the various breakfast meats. Since I wasn’t feeling too well, I just asked for some Mickey waffles, which Chef Les was happy to make. They weren’t bad, but I have to say, Kona Cafe has the market on the BEST gluten free/dairy free Mickey waffles on property (imo), so these were OK, but a bit chewy. Still, he made sure I had a plentiful amount and nicely decorated plate too! 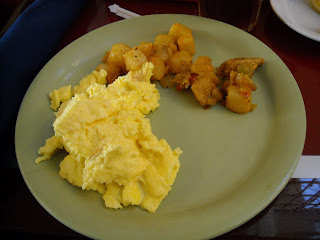 Scrambled eggs and breakfast potatoes–these were good, a bit spicy, but flavorful! 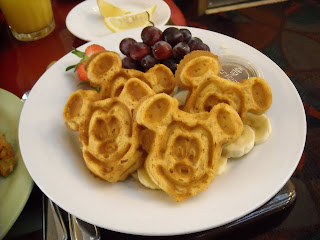 I’d say the real treat of the breakfast though was the celebration cupcake that Chef Les brought out! I have to say any breakfast that involves cupcakes is A-OK by me!!! It was great because it wasn’t just the plain old chocolate or vanilla. In fact, it was a spice cake (kind of like carrot cake without the raisins and carrots) with a vanilla frosting. The frosting was sinful…very rich. The cupcake was a little chewy, but the flavor was quite good. It’s the first non-chocolate / vanilla dessert cake that I’ve had on property (besides babycakes) and it was great. I really appreciated the effort and variety! It was a great surprise. 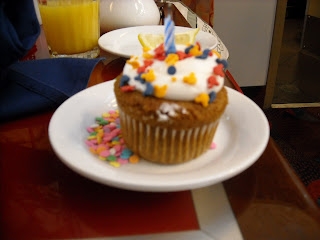 Celebrate! Spice cupcake with vanilla frosting…
Overall, it was a great experience at Chef Mickey’s. The food wasn’t really anything special, but the effort made by Chef Les was just above and beyond with the extra cupcake. Definitely a must-do again.

I’d give it a 8 out of 10 for good food, consistent service, and excellent Chef!