*This dining experience too place June 2013.

Ahoy! Captain Cook’s located in Disney’s Polynesian resort offers casual pan-Asian inspired quick service fare. This was the first time I had eaten a meal at this location, and I wanted to see if they would be as good at gluten free/dairy free meals as the rest of the Polynesian restaurant. While I can’t say it was the best meal I’ve ever had, they were able to provide me with a meal that proved to be just a little different than burgers or fries.

When I arrived at the restaurant, I wasn’t sure how to order. The restaurant is really small by many quick service standards. It has a large menu above the ordering area, which consists of several self-service ordering kiosks (similar to those in Contempo Cafe or many new restaurants like Be Our Guest). I tried using the kiosk first, and it didn’t have special diets options, so I asked a cast member working the register. She then paged someone to come talk to me. I was greeted a by a manager who seemed rather frazzled. I told her that I couldn’t have gluten or dairy and expressed interest in a children’s meal because it was later in the day and I had already had a bratwurst at Sommerfest as a snack. She that was fine and then gave me some options.

She had I could have a kid’s hamburger meal, the seasonal fish, and the chicken and pineapple skewer (which I should have ordered). I ordered the fish because I’d seen a couple of kids with it and thought it looked good. Turns out they had ordered the adult version but more on that later. I mentioned that I would like some gluten free soy sauce for the rice and she said “Oh no problem.” I sort of don’t think she heard me or understood me because the meal didn’t actually come with rice.

Once I had my order, she gave me a card that said “STOP” food allergies for the cashier and then my order. Once I paid, I waited for my meal. And waited…and waited. It took an incredibly long time to make make considering. Granted, I always would rather wait than have something brought out quickly and incorrectly. Once my food came out, I noticed there was no rice. The same manager was there, and she said “Oh it doesn’t come with rice.” To which I replied, “Oh, but you said I could have soy sauce for the rice.” Well, whoops. It was later in the day, so I just took the meal as it was and will remember to get the adult version the next time or the chicken and pineapple skewer.

As far as the dish goes, it wasn’t bad really. I think they must have seasoned the fish for me because there’s no way that they could have served something that spicy to a kid. It had a rub on it and was quite peppery. The vegetables were nice and mild–It had bok choy which is one of my favs in it! And the mandarin oranges were a nice touch to the end of the meal–a little sweet treat. The portion size was great for a kid and worked well for me eating later in the evening.

Overall, I found the food to be decent. I wouldn’t say the menu is very extensive and so doesn’t have a huge variety, but they seem to have some options that are easy to modify or are naturally safe. I also like that they have less burgers and fries options. I wish I would have gotten the chicken and pineapple skewer because I’m pretty sure that would have been a winner! On a side note, if you like Pineapple Dole Whips, they have a dedicated self serve station at Captain Cook’s. This would be a delicious dessert option if you’re in the mood for an “ice cream” treat (it’s still gluten free & dairy free according to the site and allergy books).

I wasn’t wowed by Captain Cook’s but I didn’t think the food needed to “walk the plank.” 🙂 I’d give it a 7 out of 10 for this experience. I might go back and try the other options or stick with the table service here over this location. However, I know a lot of people who have been here a lot on their vacations and love the chefs and have had great meals there. On the fly, it was just sort of so-so.

Have you been to Captain Cook’s? Would you say Aye or Nay to their food? 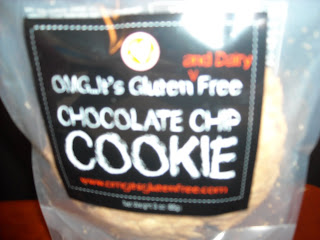 As you may have read from my previous post, since about mid-November 2011, Disney has been changing many of the WDW resorts allergy/intolerance related products. Sadly, I don’t think these things are for the better, but only time will tell how these changes will play out (and yes, from the chefs I’ve spoken too, they are not happy about this and the changes are related to money saving factors).

Taste wise, it was OK. I admit, my favorites were the French Meadow cookies prior to the FM cookie change (that happened this last year–they changed the way they made them..they were smaller and more crumbly). This cookie is made to be a large soft batch type of cookie. I found it chewy, but a little flavorless in some ways and definitely not very chocolatey (I love chocolate, so this might be relative). Overall, I would eat it again, but it wasn’t my favorite cookie on the planet. I’m just glad there’s at least one baked good that is GF/DF still.

You can find these in most QS locations (I found them at Contempo Cafe, Captain Cook’s Snack Company, and Main Street Bakery).