Sunshine Seasons is located in the Land pavilion at Epcot. As the quick service location here, it offers a tremendous variety of fresh and seasonal foods that will appeal to most folks. It is also known as being particularly friendly for special diets. If you are gluten free & dairy free, the grill station offers the most comprehensive variety of choices. I’ll be honest, I don’t try to venture into the other areas on the menu, so for me, the grill station is where it’s at. I have heard reviews from other guests who have enjoyed the tuna (modified to be served without the noodles) and salads.

The grill station often rotates it’s choices–but it’s usually some type of chicken, some type of pork and then some type of fish. If you’ve seen some of my older reviews, I have liked some of the dishes and some I’ve been thrilled when they rotated off (ughh that succotash was so gross). I had been really loving the seasonal fish with green beans and potatoes and was hoping to get it this trip–only to find they’ve modified it some.

The fish has changed from mahi mahi to salmon and the pork is now more bbq inspired. The chicken has some new topping. When I spoke to the chef, he said everything at the station at this time is gluten free (including the sauces) which is great. Two of the sides were not dairy free–the mashed potatoes I knew and expected, but now the green beans have butter in them. Bummer!

I ended up getting the slow roasted pork with the bbq sauce on the side (which turned out to be a good thing) and roasted potatoes instead of the mashed potatoes.

I wish this dish would have had a veggie component; it felt like it was missing something. The roasted potatoes were nicely cooked, I believe they were yukon golds, which I love. They have great depth of flavor. The pork chop was a nice thick portion; however, it was grossly overcooked. Like almost shoe leather consistency. I’ve had the pork chop in the past, and it has been fine, but this was pretty bad. I did make it through the pork chop (thankfully with all my teeth intact!) but I would hesitate to get it again. It just seemed like it got way too overcooked and sat too long. The bbq sauce that came with it was not my favorite. It was very vinegary. I personally like a more ketchupy bbq sauce (if that makes any sense), so this was not for me.  Good thing I got it on the side.

In general, Sunshine Seasons is a great choice for quick service meals at Epcot. It’s Disney owned so they do a nice job with handling everything. I just didn’t like the seasonal changes or the overcooked meat on the dish I got. I’ll still go back–and probably try the fish again.

On a side note, this location has a nice little special diets section, although they moved it close to the grill section away from the other areas, so it’s a little hidden. I also think they scaled back on the variety of items they had. 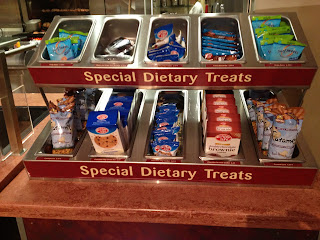 I would encourage you to visit Sunshine Seasons for something more than just burgers and fries. They offer a decent meal that is seasonal and delicious. A solid 8 out of 10 for me in general; this experience was more like a 6 out 10 because of the tough pork chop.

Have you been to Sunshine Seasons before? What do you recommend?