Following the advice of the WDW Special Diets sheet, I decided to give Sunshine Seasons a try for lunch one day. I’m glad that I was able to try this one too! It did not disappoint. I would give this an extra thumbs up for being better and more nutritious than a lot of the typical counter service restaurants. I chose to go to the grill section where there were several options that looked safe: rotisserie chicken and pork chops in particular. When I went up to the CMs, I mentioned my allergies and asked for anything safe. The one CM said he thought the chicken and pork chops were safe and that he would ask the chef. A lovely chef (with a fantastic Scottish accent!) came to assist me. He was very helpful. He pointed out that yes, the chicken and pork chop were safe. He also said the rice as a side was safe, but not the carrots as they had butter in them. He said that if I wanted he could make me steamed broccoli. I decided to get the broccoli, but found it only lightly steamed and ended up giving most of it to my family members (the crunchiness is hard for me to digest with the Crohn’s), but the rice was tasty as was the chicken. I only wish I would have gotten the pork chop! I will know for next time! Also, though I did not get it, Sunshine Seasons carries gluten free beer! They also have French Meadow brownies. 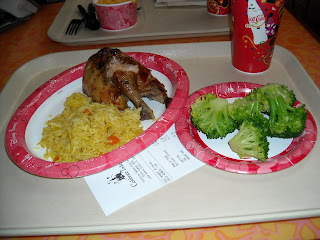 Very tasty chicken!
Overall, I’d give this a 9 out of 10 for variety and excellent service!
Counter Service Epcot Sunshine Seasons
Share: