*This dining experience took place in September 2013 and includes a gluten free & dairy free review and a vegan dining review. 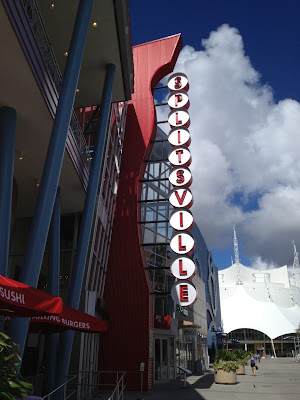 Splitsville in Downtown Disney is a retro themed bowling alley which offers not only bowling, pool, and other recreational activities but also a variety of food options as well. Since it has opened, Splitsville has been extremely popular and often hard to get into. On this particular occasion, I was able to visit as a part of the Attractions Blogger Bowl for Give Kids the World Village (stay tuned for an upcoming post about this amazing event!). I was able to contact GKTWV ahead of time and they contacted Splitsville to arrange for food for both myself and my friend Tony Caselnova from Disney by the Numbers who was on my bowling team. I was glad that they had several gluten free options and a few dairy free options as well. 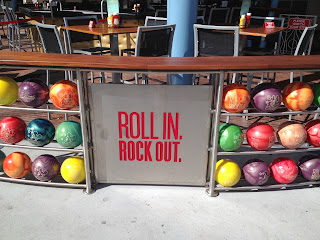 When we arrived, the first thing I will say is that this place is really neat. If you’ve ever been to Lucky String or King Pin bowling, you’ll have an idea of what this kind of a bowling alley is like. I will say, that this place is sort of oddly set-up. It’s very tiny compared to many other big retro bowling alleys. There are two levels and the blogger bowl took place on the 2nd floor. While we waited I got to look around and check out the sushi bar. 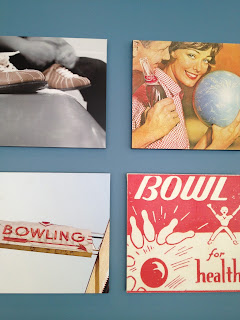 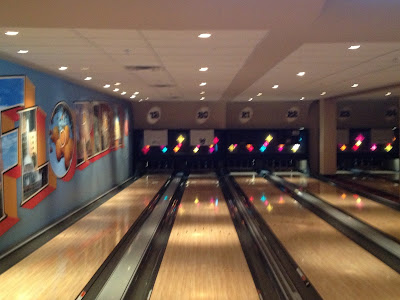 Once we checked in at our lane, I asked a Splitsville representative about special dietary arrangements. Now, when I had arranged food with GKTWV, they asked me to give them several options from the menu that I might be interested in. Thankfully, I had some idea of what might be safe gluten free wise thanks to my friend Alexis over at Gluten Free in Orlando! She has a terrific review with a photo of the menu HERE. I had requested, based on her experience, three options: the mahi mahi with voodoo shrimp, the grilled salmon with brocolli, and the Tijuana chicken sandwich all of which were on the Splitsville GF list (one of them isn’t anymore but more on that later). I also requested that they make a vegan dish for Tony.

Now, the Splitsville representative who helped us (I will assume a manager) told me that my sandwich needed to be re-made because they didn’t know it needed to be dairy free too and had been prepared with cheese on it. They asked Tony if he was OK with a stir-fry, which he was. When the items came out, I saw that my sandwich was on a bun that looked very similar to Udi’s. I asked what kind of bun it was, if it had dairy, etc. The manager radioed the kitchen and they said it was just “tapioca and water.” Now if you look at this picture, this is definitely more than just tapioca and water. I make Chebe buns all the time and they are totally different. *I later learned that I consumed a regular bun that was not gluten free. Well, that does explain why I got sick.

Tony got the spicy veggie bowl, and I have to say it looked good. He seemed to like it, and it looked fairly substantial of a meal overall. Honestly, I could have gone for something similar but with chicken or shrimp. The fresh avocado looked delicious! Later I discovered they can do GF rice bowls, which would have been good to know!

To me, this sandwich was OK. The chicken was nothing special and the salsa on it was just OK. The broccoli was just plain steamed broccoli. I’m not sure I’d order it again based on taste. But, I definitely won’t be ordering it again based on my stomach afterwards. I definitely got glutened. I had massive stomach pains about 30 min – 1 hour after eating. Not good!!

I also discovered after looking at a newly released menu from Splitsville indicating GF options today that the Tijuana Chicken is not listed as Gluten Free. That is not comforting considering that I was sick. Now, it may be that they can easily modify it GF but it’s certainly not listed on their standard menu as GF. *I later learned that the rest of the sandwich minus the gluten filled bun can be made GF just with a lettuce wrap.

You can see the Splitsville menu HERE

Overall, I liked the atmosphere of the restaurant and bowling alley, but I found the food to be pretty mediocre and the GF offerings sparse. Adding in a second dietary need seemed to really put a wrench in the wheel too. They also didn’t seem to have much in terms of vegan options either. Overall, I’d give this a 3 out of 10, considering that I got sick. I think it will be a while before I eat at Splitsville, though I would happily go bowl there again especially if it were for a great cause like the blogger bowl! Great for entertainment, just maybe not the best food option for a special diet given this experience.