This is the second review in my series of runDisney reports. I will be reporting after each race during the 2013-2014 season and will be noting information about running with a special diet, including offerings available through runDisney. 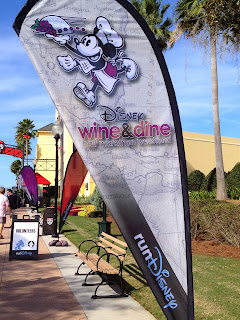 Wow, it’s hard to believe that not that long ago I had my first runDisney race. In fact, it was my first race ever! I was so nervous running a 5K for the first time, and not knowing what to expect was definitely nerve wracking (you can read all about that experience running the Happy Haunted 5K HERE). This time around, I had one race under my belt, and I learned a lot of lessons from the first time around. The first being to relax & have fun!

I knew going in this race was going to be a lot bigger, so I made sure to get to the expo center early on Friday when they opened at 10 a.m. This seemed like a way that I could get to get my bib without feeling stressed out and also get to walk the expo more. I also made sure to pick up a few last minute outfit additions – a sparkly skirt from Sparkle Athletic and a sparkly headband from Sparkly Soul. Yes, I sparkled from head to toe! The first thing I noticed was, yes, the expo was definitely bigger this time and I could definitely confirm the larger amounts of runners in the races too. But, the crowds were definitely lower than they were for Tower of Terror weekend when I arrived at the noon opening hour.

I grabbed my bib first thing, so I could enjoy the rest of the expo. I was very surprised to see that I was in corral B (as I’ve learned you get placed based on when you pay for your race registration, not by times, etc.), which was one corral ahead of my previous corral. I’m glad I haven’t been in the last corral, so I’m keeping that in mind when I register for next year’s events! 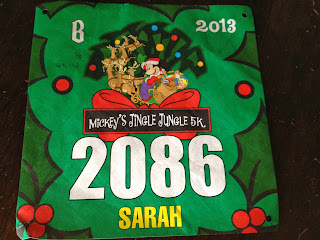 Next up, I ran to the expo center to explore & pick up my race t-shirt. The shirts were quite cute this year! I liked them better than the Happy Haunted 5K ones, but then I’m partial to the holidays! 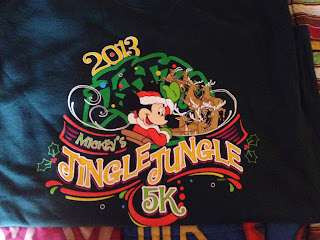 In addition to grabbing my final race costume clothing items, I also got a chance to explore the booths and see what was available. I had the chance to play Chiquita banana plinko which was fun!

And I also ran into my friend Jen from Travel Girl on the Run! She is a fellow Crohnie & it’s always great to chat with her about our Crohn’s nutrition & running.

To top it off, I also scored a $5 gift card to Fit2Run, which is a Florida local running store. We have one in SRQ, but I was dying to check out the newly opened Downtown Disney location! This was a perfect excuse to stop by and make that visit.

Once I got done with the expo, I headed to my resort, Animal Kingdom Lodge – Kidani Village. It was so nice to be so close to the Animal Kingdom park where the Jingle Jungle 5K is held (especially at 5:30 a.m.!). I had the chance to just chill and relax for a few hours before my family came in. Then, it was off to dinner to enjoy a pre-race meal. I didn’t want anything too heavy, so we went to Kouzzina (stay tuned for the review) where enjoyed a lot of GF/DF bread.

Another thing I forgot the last time was making a checklist of essential items. I forgot my armband and so many other little things. This time I made sure to checklist things (of course, I still forgot a few items, but not crucial ones). I also laid everything out the night before I went to bed to bed ready to go first thing in the a.m.

Once the 5 a.m. wakeup came, I was ready to go. I changed into my race outfit and also got my bib on. I then made sure to drink a protein shake. One of the biggest struggles I had the last time was nutrition, so I wanted to support myself as much as possible. I prefer the Plant Fusion chocolate raspberry shake with water. Bring a portable shaker, and you’re good to go! I also packed myself a Gu, which I normally wouldn’t consume on my short runs but because I have Crohn’s and often lose a lot of salt (plus I drink a lot) I found I really needed something to replace my body with after my run the last time. I also tend to push myself in these races so it was extra crucial. Gu’s are gluten free & dairy free so it was great to have on hand. Check out the one I found for the race! Fitting, no?

One of the big differences between this race and the Happy Haunted 5K is that the corral setup was totally different. It seemed more compact and also a little bit more crowded. The lines for the character and holiday photos were huge, so I didn’t get a chance to officially pose in them. I did however get an unofficial one! 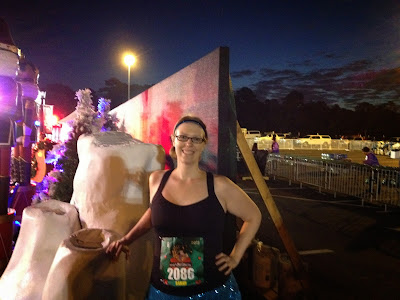 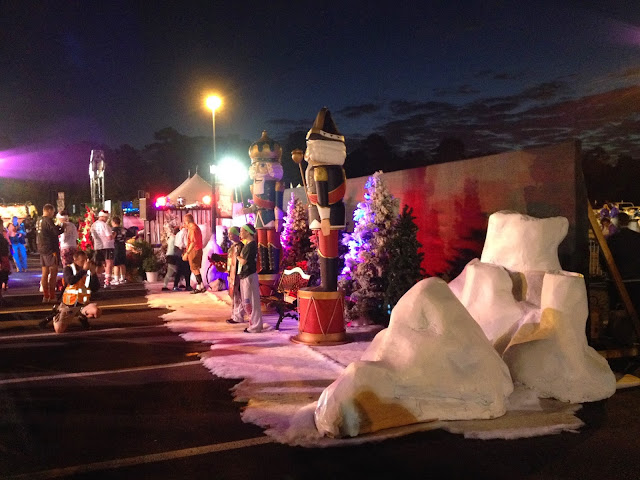 The other cool things about this race are the fake snow & the holiday music. Yep, you read that right–snow!! They use soap bubbles to create snow effects, and it’s really cool. Totally put me in the holiday spirit and so fitting for this race. I will say they didn’t play as many holiday songs as I would have thought. It was way more dance music. Here’s a video with the fake snow! 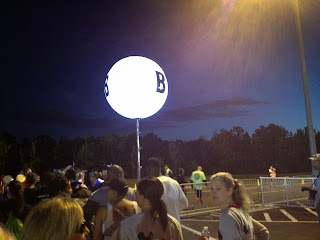 I finally made it to my corral and made sure to stick to the side. I don’t know why, but I like the sides. Plus, I get to chat with my family too! They surprised me with a sign to give me motivation to run harder. Gee, thanks guys!

And before I knew it, it was time to run! This race didn’t have quite as much fanfare as the Happy Haunted 5K did, and I was a little disappointed in that. It just seemed like it was rather rushed and not quite as much anticipation/build-up. But I will say that the race inside the park made up for that.

The first mile or so was in the parking lot. That was pretty boring! It was cool because there were a lot of folks around chatting and having fun, but as far as decor, there wasn’t really anything. You could hear mostly just the announcers & music from the start of the race. Then when you got into the park, things got way more magical!

I will just say that I adore the Animal Kingdom and this was such a great place for a race. There were many character spots, and I personally wanted to try to get a least one photo. I skipped most of them primarily due to long lines & lack of theming. I mean I like Rafiki but I was hoping he’d be dressed in a cute holiday costume! The park had lots of holiday music playing and it was just neat to run past the Tree of Life and Expedition Everest!

Another good tip is to make sure you hit all of the water stations, even if you don’t think you need to. It was much cooler than the Happy Haunted 5K but still a good idea to hydrate whenever possible. And thank those amazing volunteers who are helping out! They rock!

The one character spot I missed but really regretted was Chip & Dale. I love those chipmunks & they were so cute in holiday garb. But the line was soooo long. I was glad I was able to meet up with Donald later in the race.

Before I knew it the race was over! It was definitely a really awesome race. Not only was the theming great, but I also felt more confident as a runner (pushed it this time and set a 13:52 mile pace throughout the entire race). I also got to see lots of blog readers including Linda & Brandon Townsend! Brandon and I even ran together the last mile! Way to go guys!!

After the race, I scored my Powerade, water, banana and fitness box. I also had some of my Gu, even though I didn’t feel like I needed it, I still had it anyway. I have to say…I am not a fan of the salted caramel!

I was surprised to see some slight switches in this fitness box — the addition of Late July chips & a Del Monte Fruit Burst were added. I also really like those 180 snacks! It’s nice that there are several GF/DF options in the box, and I hope Disney continues to keep up this trend. The other big lesson I learned was that eating shortly after the race works best for me. Within the hour, I was scoring breakfast at Boma!

Overall, I really enjoyed this race. I’m super excited for the next race which will be the Family Fun Run 5K at Marathon weekend! Here’s to more race fun!

Do you runDisney? Do you have any special diets tips for running a race?
For vacation planning for runDisney events, check out Destinations in Florida–your one stop shop for all things Disney! (click HERE for a direct link to their site!)