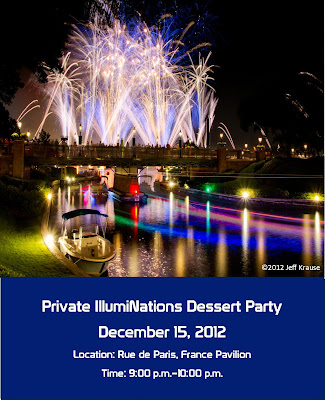 The 1st Annual Special Diets Private IllumiNations Dessert Party was held at Rue de Paris in the France Pavilion at Epcot on December 15, 2012. Co-hosted by myself and Allergy Free Mouse, this event was to my knowledge the first of its kind at WDW. From 9 – 10pm that night, guests could enjoy access to a private IllumiNations viewing area (it was the most spectacular view I’ve ever experienced of these fireworks!) and a special dessert buffet that was free of the top common allergens: gluten/wheat, dairy/casein/milk, soy, egg, peanut, tree nut, fish, and shellfish. Tickets were $50 per person with children ages 3 and under being admitted free of charge. The tickets also included some hefty gift bags & giveaway items (more on those later!)

The dessert buffet was an amazing array of deliciousness! Working with Chef Matt over at Disney’s Catered Events was a dream. He was so wonderful and wanted to go above and beyond to make our dessert party amazing. He really took things to the next level in my opinion, especially since many times allergy related desserts can be a little boring. Not ours! The items created for our buffet were:

Each of these desserts were outstanding. In fact, over and over I heard from guests who didn’t have special diets (but accompanied a family member who did) that they simply could not believe that these were free of so many allergens. I have to hand it to Disney on that one! Chef Matt was also extremely communicative on the ingredients, offering to send me the ingredients list and also be on hand at the party to answer any questions. Per a legality, they actually cannot put ingredients on the labels on the physical buffet (more than the actual title of the dish), but with the chef on hand and extra ingredients sheets with me, we were well set up to assist guests. We also had guests who had additional allergies, which were reported to catering and some received separate dishes that eliminated their additional allergens (and kept separately from the other dishes). The other very important thing was that everything was plated so that everyone could take their individual dishes. Very nice touch!

I am still hearing rave reviews about the desserts, and I can echo those reviews. I adored all of them. When I went for the pre-event tasting I expected to dislike some of the initial dishes, but I didn’t. I loved all of them. In fact, I brought my family to the tasting as my non gluten free/dairy free tasters and they were also blown away. Chef Matt used Namaste brand mixes, and I can say, they worked very well in these dishes and reminded me of how versatile their products are. The hands down winner was the peach blueberry cobbler with the insanely delicious topping on it. I can’t say I’ve had a cobbler topping that good since going GF/DF. I also really loved the Spiced donut with the caramel apple, which was really just apple juice, apples, and sugar caramelized. Sooooo good. The lemon poppyseed tea cake was very refreshing, and the lemon glaze was delicious. The chocolate raspberry cupcake was really good. Loved the edible gold leafing on top. Cool touch! The chocolate brownie bites were also yummy–they were dusted in cocoa powder and I could have eaten a lot of these. And lastly the big surprise was the strawberry parfait. I was not expecting to like this one but I really did. I liked the vanilla cake in it and also the use of hibiscus syrup. It was unexpected but delicious. And the candied orange zest was a nice touch. I will say eating it at the buffet, I thought the cake actually got very mushy (I ate a little later than other guests), so I might rethink or have the chefs retool this one at the next party.

After watching the amazing IllumiNations fireworks (and yes, that view was beyond amazing. I wish I had pics of it), we still had some time to mingle and eat some more desserts! When it was time to leave, guests were given some really substantial (and I mean rather hefty!) gift bags. We were so lucky to have received support from over 50 companies in the gluten free and allergy free industry. It was amazing to see the outpouring of support from them. From cookies, snack bars, GF pretzels, mixes, books, magazines, and much more–we received samples and even full size products! We also received some awesome giveaway prizes–like gift baskets from Udi’s shipped directly to the winner’s home, baskets from Kinnikinnick & Schar, a TasterieBox, Namaste mixes and cookbooks, Sample box from Bee Nut Free, Allergen free gingerbread kits from A&J Bakery & Izzi B’s and so much more. It was so exciting to provide these types of goodies to the guests at the party. I personally have never been to any parties at Disney where guests got much of a gift bag or any sort of major goodies in addition to attending the event, so I really wanted to add this component to the party.

Overall, I can’t say how much fun this event was to host. I really enjoyed meeting all of the guests and seeing the excitement on their faces, especially the families. To be able to provide a venue where kids who normally can’t enjoy goodies to have the ability to enjoy something special for them was just amazing. A couple of kids told their parents that this was an “Awesome” event and that they had a blast. Getting to get to know others in the community who also have special diets was a real treat. It’s not often that groups of us can get together and just enjoy. I can’t say thank you enough to all who attended for allowing me to have this experience with them!

I’m so excited to host this event again next year. Based on requests, I think I’m looking at Fall 2013 (September / October 2013) to host this. If you’re interested in attending next year, you can let me know your preferred dates on the survey at the end of this post. An official date will be determined in the coming months.

For more pictures from the event, you can visit the Facebook page or the Pinterest Board. I wish I had more photos to share, but I ended up not taking very many due event obligations. If you attended the event and have some photos to share, I’d love to see them!

I finally got to try the gluten free churros from

How cute (and tasty) so these gluten free cheesy p

Happy Easter! Wyatt & Cactus hope you have a most

This past year has been tough for us all, and like

It feels nice to see some seasonal traditions back

Tots, tots, tots! You can never go wrong with the

3rd times the charm? This is the third time we’v

The tropical chocolate tart from Olivia’s Cafe a