I just ordered a GF/CF cake for my birthday when we go at the end of January. The cake will be delivered to our hotel room at the Wilderness Lodge (coming from the WL bakery). The dietary cakes seem to only come in one size: 6 inch. It comes either in chocolate or vanilla. The cost at the time of this post and quoted to me by IPO is $29.50 (I was originally quoted $21, but this was for a regular 6 inch cake). According to IPO, they take the requests ahead of time, but order them 1 week prior to your request date. I’m excited for the cake and can’t wait to share my review.

If you are ordering a special diets cake, you will want to contact IPO if you are staying Club Level or call the Cake Hotline. Their number is: 407-827-2253. This phone will ask you a lot of questions to get you to the bakery you need to get to. I recommend you call ahead of time, but be prepared for some difficulties. I tried multiple times to call the cake hotline and was routed to different bakeries. I originally wanted a cake at California Grill, but had such difficulty getting a hold of anyone, that I went with the Wilderness Lodge where we are staying. I even emailed Brenda Bennett at Special Diets; she forwarded my requests on, but I never heard from them. I’m not saying every experience is this problematic–I’ve heard some wonderful things from others–but be prepared to not get an instant response.

I’m under the impression that you can get these cakes that are GF/CF at most locations. This cake is also soy free, but does contain eggs. According to IPO: “You will need to put a credit card down on the cake request however they will not charge until the day of for room service and at the location if you choose to have the cake at one of the restaurant.”

I asked Brenda Bennett for the recipes to the dips served at Jiko on my last visit (see my review for pictures of the dip sampler); however, it looks like they are not made in house (bummer!). They did tell me the vendor information, in case I wanted to order them. Here’s what Brenda wrote me:
“Unfortunately the dips are not made in house. They are from a vendor called Greek Island Spice.”

Here’s a link to their website: http://greekislandspice.com/c/index-c.htm
I’m not sure that I would order anything, but it is nice to know that I could “recreate” my Jiko dinner, if I wanted to.

For my 30th birthday in February, I am staying with my family at Disney’s Wilderness Lodge at Club Level. I contacted IPO (Itinerary Planning Office) about my dietary needs, and they gave me the following information: “I believe that we are able to get some desserts and gluten free waffles as a special order. Usually we contact the chef about a week prior and they order the items”

They said they contacted the chef, but I still have not heard any word on ordering or special items. Judging by the info Brenda Bennett has given me and my experiences at the Animal Kingdom Lodge, I believe I should be able to get Kinnikinnick brand muffins and donuts (I really like the chocolate chip muffins and the cinnamon sugar donuts) and Vans waffles. As far as desserts, it will be interesting to see what they provide.

My plan is to contact them a couple of weeks before we arrive and follow-up and make special requests. I am not necessarily expecting specific things, but it would be nice and it gives them an idea of things I like. I’ll keep everyone posted as I hear things!

I am posting links to Google Docs for all of the forms WDW Special diets will send to you via email in preparation for your trip. They are updated every so often, so be sure to email them before your trip. In addition things can change quickly around WDW, so be sure to check upon arrival at restaurants to make sure items are still safe for you to eat.

Here’s a link to: No Gluten Added Products at WDW
and more Dietary Request Information
and list of prepackaged items available
and finally a list of where the allergy free chicken tenders are served.
This is what the Guest Allergy/Dietary Request Form looks like.

I hope these are helpful for your planning. The dietary/allergy request form is something you should fill out and send to special diets after you have made your ADRs. This will help with your reservations and prepare the chefs for your arrival. In addition, the chefs can then contact you prior to your arrival if they need to.

I love these brownies! If you read my review and check out the photo, you’ll see how wonderful and decadent these brownies are. You wouldn’t even guess they are dietary restriction safe. Share them with family and friends! I am so glad that the chefs at Crystal Palace were willing to share:

First off, let me make a brief statement about waiting and ADRs at Crystal Palace. Perhaps it was because we went 2 weeks after free dining started, but even though we had an ADR we waited a ridiculous amount of time (to the point that I was going to leave in 15 min if we hadn’t been seated. We waited an hour). It was August so it was very warm and very crowded. Granted, I knew that this would be a popular dining location, but I really wanted to try this restaurant because I heard they were good with dietary restrictions. That being said, after a long wait, I was pretty tired and not overly excited (other than being seated and getting something to drink), but trying to get in the spirit of things. We arrived at our seats, and I reminded the waiter of my restrictions. He said he would get the chef and he also said that they make their own dietary desserts there and that he heard they were really good. So that made me pretty hopeful. The chef then arrived at our table and had the same pad of paper as Chef Kim at Kona. He asked my name and dietary restrictions. He then took me around the buffet and let me know what foods were OK to eat. For the most part, I could eat a lot here. The salad bar had a lot of offerings including a shrimp, hearts of palm, and quinoa salad (very good, but I got a little sick because of the vinegar. Apparently because of my Crohn’s I had sensitivity to vinegar), salads and non-dairy dressings (Zinfandel vinaigrette was tasty, but again vinegar based so it didn’t agree with me). I had a lot of meat choices to choose from: roast chicken, carving station (with pork loin and prime rib, which was later put out because we were there in the middle of lunch/dinner changes) I also enjoyed shrimp cocktail. The chef asked if I wanted tapioca rolls to be brought out, which I said yes to. I’m not a huge fan of tapioca bread/rolls, but I had heard good things about them and thought I’d give them a try. They were warmed up which helped. Here’s a picture: 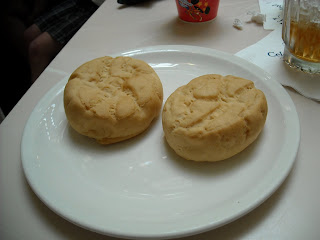 Honestly, they weren’t bad. The texture was a little spongy, but they worked and tasted better than a lot of other GF rolls I’ve had.

The chef also asked me what I’d like for dessert. He offered me rice dream ice cream and a brownie cake. I am always looking for decadent chocolate desserts, so I said ice cream and cake would be great. Once I finished my meal, I let my server know I was ready for dessert and he went and got it. WOW! It was the best dessert of the trip. So good! I was practically licking the plate. It was the most decadent, chocolatey, moist, and non-dieatry tasting item I’d had! (and did the whole trip!) It was awesome. Here it is: 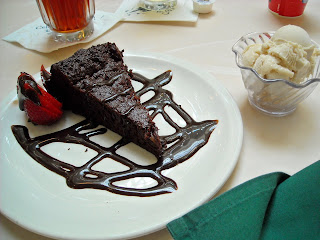 While I’m not sure I’ll make the trip to Crystal Palace for a while, I will say the dietary restriction needs were met with great enthusiasm and variety. I only wish I’d had asked for the allergy free chicken tenders (I saw some kid with them later) because I was CRAVING chicken tenders. But there’s always another time and another location. Overall, it was a nice place to eat, but be prepared for a wait. 8 out of 10.