Ah, breakfast at Kona Cafe….I dream about those Mickey Waffles from Kona on a regular basis. They are soooo good. I seriously can’t believe they are gluten and dairy free. This trip ended up bringing not one but two breakfasts at Kona. The first was planned, as we had made ADRs for this months in advance, the second was a spur of the moment, made the ADR the night before because my brother wanted to treat us to breakfast. Fine by me! Both meals were great as usual. The second meal, the chef was Kristina (I believe that is her name) and she had waited on me in the past–she was the chef who gave me butter on the plate–eek! But she was very good this time and I had no problems. I so far have no desire to veer from the Big Kahuna meal–so that is what I got both times, along with Lilikoi juice! YUM! Another solid 9 out of 10 for being a consistently good breakfast and good service. 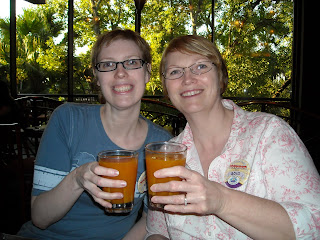 Me and my mom enjoying our Lilikoi juice! 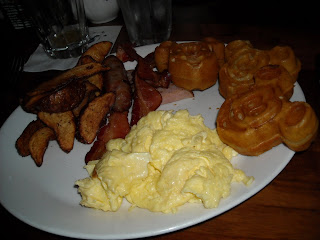 Big Kahuna at our first breakfast… 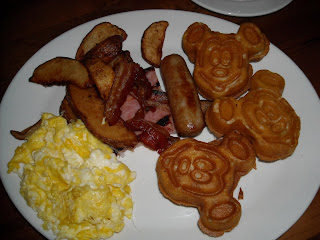 And from our second breakfast….gotta love those Mickey Waffles!

After my fantastic dessert at the California Grill in February on my birthday, I was hoping to have the same dessert made for me this trip. I’ve been in contact with Brian from the bakery at the Contemporary who said that he could do this. We determined that the desserts would cost $15 a piece and that they would be delivered after 5 p.m. (I arranged this part through the Contemporary’s private dining). However, there were a few snags that occurred. To begin with, the private dining person that I spoke with said that they would deliver the dessert in the room and put the desserts in the fridge for us, if we weren’t in the room. But when we got back from dinner, we discovered that this hadn’t happened. No dessert. So I called private dining, and they stated that they cannot deliver when a person isn’t in the room (not true, I’ve ordered things before, including cakes that were delivered when we weren’t there). They brought the desserts up, and the lady who did that informed me that they had to add chocolate b/c the sauce was running. UM, you added chocolate?! What kind of chocolate? I have food allergies! She felt really bad, and said she was pretty sure it was plain dark chocolate shavings, but that she would have to check. So, they left the dessert with me and then called me to let me know that the chocolate was dairy free. Pheww! Sigh of relief. I think what worried me the most was that they did not bother to check to see if there was a food allergy attached, which should have been clearly noted. However, I understand that they just received it from the bakery and were probably not in charge of it. All worked out in the end so that was good. Now to the dessert….it looked like what I ate before, but it was NOT what I ordered before. Totally different. It was one layer of very thin chocolate cake and dairy free chocolate mousse. Before the mousse was so flavorful and chocolatey–this was not so much. It was pretty bland and had a really weird texture. Overall, it was edible, but everyone in the family agreed it was not the same as the last one. I do appreciate the effort, but the dessert seemed very sloppily made and definitely not as much effort put in it as the last one. After this experience, I would probably just order the regular gluten free/dairy free cake instead of having a special dessert made. I’d give it a 4 out of 10, considering the confusion and taste of the dessert. 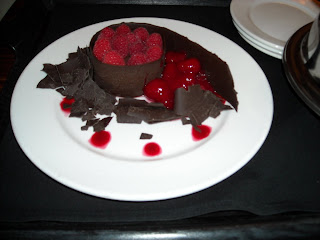 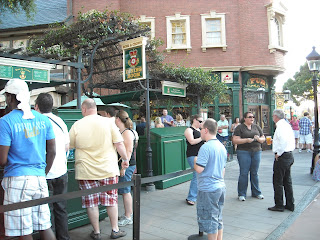 Rose & Crown Pub–as you can see very busy from the Food & Wine Festival.
I would later get a hard cider from here–YUM!

I have been wanting to try the Rose & Crown Pub for sometime now. So, this trip (for something different), we decided to try it out. I had seen on some of the sheets from special diets that there seemed to be a fair amount of choices that were not beef (I don’t eat steak of any type and very rarely eat ground beef). I checked out the menus beforehand, and I was hoping to try some pork dish or fish. However, upon arrival, I saw that the menu had changed from what was posted on allearsnet.com and on Disney’s official website (this gives the lesson that menus do constantly change, so it’s important to be flexible and prepared that the options you think you might want may not be available when you dine there). No pork! I was a bit bummed, but began going over options with the chef. She said that most things could be modified (which is nice to hear) and that the Fisherman’s stew was mainly gluten free (the menu describes it as having a tomato ale broth, but the ale is not beer, it’s actually vermouth–which is generally considered safe/gluten free) they would just need to leave off the garlic crouton. She did offer to make a tapioca roll garlic bread for me, but since I don’t usually consume yeast, I declined. (last trip I got REALLY rambunctious with the rolls and it was not a good idea). This was a very tasty dish. Not overly heavy or anything. I especially like the shrimp and scallops. 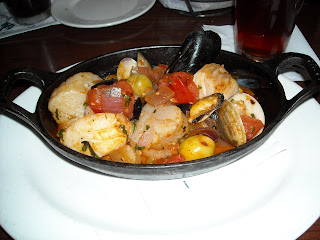 YUM!
They did say that they could bake the fish for fish and chips, but the fish stew sounded more exotic than baked fish to me (it was very flavorful). For dessert, the only real options I had were a french meadow brownie (of which I got PLENTY of on the trip) or sugar free raspberry sorbet. I went with the sorbet, which was quite tasty and very refreshing. 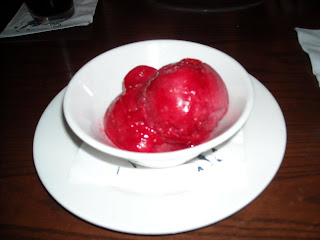 Raspberry Sorbet
Overall, I was pleased with the meal. The chef was very helpful and the waitress was great. Her mom is a celiac, so it was fabulous having someone who understood. Overall, I’d give this a 7 out of 10–solid meal and service.
Share:
Uncategorized 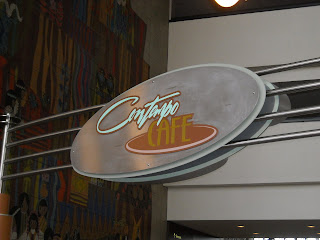 Staying at Bay Lake Tower, we had a great location and access to yummy restaurants and a decent counter service. Contempo Cafe is located in Disney’s Contemporary Resort (which is connected by a walkway to Bay Lake Tower). It reflects a newer type of counter service, in that it has a non-traditional ordering system. There are kiosks set up for you to order your food. Admittedly, this was a bit confusing to try out. Our first day, we grabbed lunch here. I wasn’t sure how it worked with allergies, so I found a CM who was working the food counter. They then got a chef for me. The chef then asked me what I wanted, and I mentioned that I was interested in the honey lime chicken sandwich they had. He said that without the bun and cheese, that this would be safe. He did offer me a tapioca bun, but I politely declined, as I tend to avoid yeast (It messes with my Crohn’s disease). He said he could do a bed of lettuce with the chicken, which I was happy with. He also said their fries were used in a dedicated fryer. So, we went with that. He then said I had to order the item on the kiosk and then when I went to the cashier (who gave you a wait remote) to tell them that I had an allergy, so they could flag it. It was a bit confusing at first, but once I got the hang of this, I was able to figure it out when we ate there 3 more times. The honey lime chicken was fabulous! They also put salt and pepper on the fries which was a nice touch (and other times I ate there they did not do this). 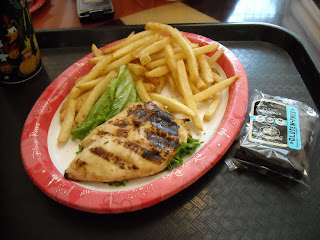 This was definitely a great meal. Overall, I’d give it a 7 out of 10–solid, but slightly confusing system.

Perhaps the most difficult task when traveling, is making sure I can find places to eat or that I have safe forms of protein with me. It can be really difficult! Because I fly out of Detroit Metro to Orlando, I checked what places would be available in the McNamara terminal where we fly out of (we use Delta as our airline of choice). Lo and behold I found a Boar’s Head Deli! Boar’s Head deli meat is gluten free! Hurrah! So, I went to the counter that morning to see if they could just sell me the deli meat, sans bread. This really confused the people working there because they said they didn’t know how to charge me. They decided to charge me for a sandwich–ouch! $9.00 for deli meat?! Well, they did give me two packs of turkey, which probably ended up being a pound or so of meat (so I guess the price was comparative). Overall, while I’d have like a lettuce wrap sandwich, this worked. Not the most ideal, but sure OK when you have no other options. I’d give it a 3 out of 10 for difficulty obtaining anything, without much discussion. A lot of work! 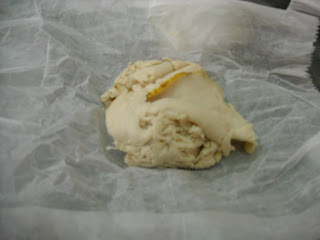 Pheww, I just rolled in last night from WDW and boy am I tired! The week was super busy but fun. I have loads of food reviews and pics to post! Hopefully, I’ll be able to get a good set of reviews in the next few days! Can’t wait to share all the yummy food I got to eat (50’s Prime Time’s gluten free/dairy free fried chicken was beyond amazing!!!!).