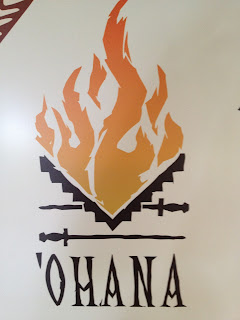 Ohana means family, and this is a great place to visit with your family & friends which is exactly what I did for my birthday celebration. I hadn’t been since May 2012, so it had been quite a while since my last visit so I was excited to head back.

Upon being seated, we were told (as usual) that the chef would come to the table. One of my friends at the meal is also gluten free and is allergic to yellow food coloring, so this would be a first to see how inclusive the typical offerings I get would be. (See previous reviews for gluten, dairy, and soy free as I have another friend who has been able to eat with me there successfully)

First up, I will note that we had a bit of a chaotic meal, in that they usually don’t bring anything out until the chef comes, but they did bring out salad & such while we were talking to him. I was so looking forward to the honey lime dressing & salad that Ohana normally has, but I was surprised to see a new salad. Turns out they have a new chef and they are trying out a new menu. Ugggg. Why mess with a good thing?! The new salad was another vinaigrette with greens and diced papaya & mango. The dressing was a papaya mango dressing. I was able to eat this, but to be safe the chef gave my friend a salad with balsamic vinaigrette (and ended up bringing me one too! That’s too too much salad for a person with Crohn’s, but nice of him to think of me).  I will say, I liked the new salad but I really missed the honey lime. It was good, but the original salad was much better in my opinion. The side salad with the balsamic vinaigrette was so-so. I found it to be an unbalanced dressing (very tangy).

On a non-allergy related note, I will mention that the other big change to the menu was the removal of the sauces for the appetizers & meats. They used to have 3 sauces and now they only have a peanut sauce (which has changed recipes). The group was a bit bummed to see the lack of sauces. For allergies, we still were able to get the safe Teriyaki & sweet & sour sauces.

The chef also brought the GNI brand rolls out to us. Blech. These were particularly bad, as they didn’t heat them properly and they were very crumbly and dry. Not a big fan of these in general, but these were really not so good. Not even Earth Balance could save them!!

Next up were the chicken wings. Thank goodness these weren’t changed!! And also thank goodness my friend could eat these. Hurrah! These were tasty as usual.

I will mention that in the midst of all of these we were being brought over the beef (which I don’t eat and my friend said was too rare for his taste–and my mom’s too!) and shrimp. I really love the shrimp, so I was happy to scarf them down. Only bummer…a few were still a bit raw! Yikes!! Just an excuse to get more thought right?! Somehow I forgot to take a pic of them though. Whoops!

Then the chef brought out the safely cooked chicken & pork with rice and veggies. I liked that they grilled the meats in the back–usually they are pan fried–that was a nice touch! The rice was not very good. It was gummy and overcooked. Not quite sticky rice and not like regular rice. Of course, if you put enough sauce on anything it will taste ok. The veggies were also nice. Usually I just get broccoli & carrots, so this was a good change. Overall, I found the main part of the meal to be OK, not quite as good as I have had in the past.

I mentioned before that they seemed a little scattered at Ohana that night. I found the waitstaff to be a little overwhelmed and the chef was REALLY hard to get a hold of. My friend wanted more chicken wings, and they misinterpreted it and gave him grilled chicken. I found the meal to just feel a little more frazzled than usual, which is weird because I didn’t think they were that busy comparatively.

For dessert, we both got a tower of Rice Dream non-dairy ice cream (my poor friend always gets stuck with the non-dairy when he’s with me!), Enjoy Life chocolate chip cookies, chocolate syrup, and berries. I found this to be much improved over the OMG It’s Gluten Free brand items (which I’m not a huge fan of).

Overall, I had mixed feelings about Ohana this trip. I really love this place so much that it’s been a staple for my family over the years; however, I was a bit bummed by some of the new changes and the general experience this particular trip. I know change is important in restaurants, but I will definitely miss the honey lime dressing if they choose to replace it permanently. Hopefully, they’ll listen to guest feedback to determine what the right choices will be for the menu. In terms of service, I’m sure we hit a bad night so I won’t fault them and not visit again because of it, but I do hope the next experience is a little bit more like what I normally experience there. Perhaps with the new menu changes things are a little more chaotic than usual.

I’d give this a 7 out of 10 for this trip. Still solid, but could have been a better experience overall.