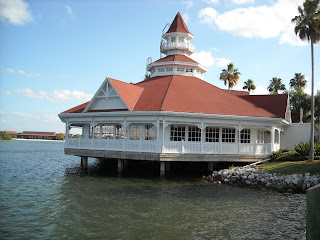 I have long wanted to go to Narcoossee’s for the views and the seafood. I’ve heard loads of great reviews, and so when we had the deluxe dining plan and an extra credit, it seemed like a no-brainer! I chose to have my celebration for my graduate degree here as well and had arranged for the GF bakery to make me something special for dessert. 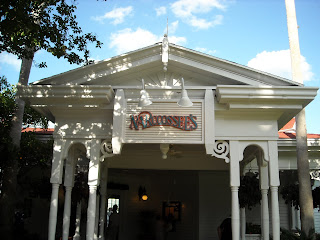 Entrance to Narcoosee’s
As we were greeted by the hostess, they confirmed my celebration and asked what it was. When I mentioned that I had just gotten my graduate degree in Library and Information Science, he was very excited and said his daughter is working on her degree in that field too. Then one of the other hostesses that seated us was actually get her master’s in it too! Weird coincidences, but nice b/c they were very excited and nice about the celebration. I got a special menu for the event and they decorated the table nicely with mickey confetti! A great touch. We also had a wonderful seat with great views of the water and the MK!

I was greeted by Chef Noah who was very nice. He asked what I was interested in and when I said that I wanted lobster, he said he could make something lobster based for an appetizer, and asked if I liked Asian inspired food (which I do!). For my entree, I chose a fish and lobster entree with a tomato saffron broth. We subbed out the pasta for rice, and the dish didn’t need any other modifications. For dessert, he confirmed that they had a dessert plate for me. He also said he’d bring me some tapioca rolls.

My appetizer arrived, and I have to say I was blown away. It was beyond amazing! It was a great Asian inspired salad with lobster, sesame oil and greens. It was divine. I scarfed it down! After this course, I was soooo excited for my entree. 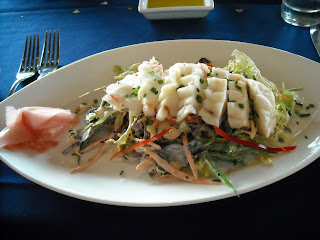 My Asian inspired Lobster Appetizer, created just for me!
Now, I have to say, my entree looked lovely when it arrived. However, I was sadly disappointed by the rice, tomato and saffron broth. First off, he said it was going to be basmati rice, and it most certainly was NOT basmati, it was a long-grain rice. Then the broth itself was horribly spicy. Not even good spicy (and I do enjoy spicy food, as you will see in reviews of Sanaa and their Durban chicken). I found the whole sauce to be out of balance and not particularly tasty. The fish and lobster, on the other hand, were divine. Luckily for me, they were resting on top of the rice and so did not get much sauce on them. I ended up eating the meat and very little rice. I had gorged so much on the appetizer that it wasn’t too disappointing, but I wished perhaps that I had gotten them to make me something Asian inspired for the entree too. I would not get this entree ever again. 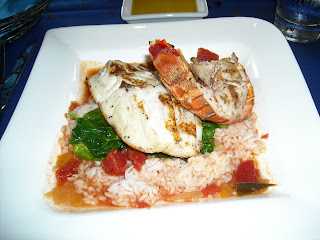 My entree–grilled fish and lobster were fabulous, but the rice and sauce, not so much…
Then it was time for dessert. I received two mini desserts–a chocolate brownie with vanilla frosting and a strawberry, and a chocolate cake with fresh raspberries in it. It also had a strawberry coulis with it (the best part of the dessert). The cake itself was ok, as was the brownie, but nothing fancy. It sure was no Babycakes! However, for the GF, this was pretty good considering when I went to tea there, they promised me loads of desserts and then ended up giving me a French Meadow brownie. Overall, not bad but not anything spectacular. 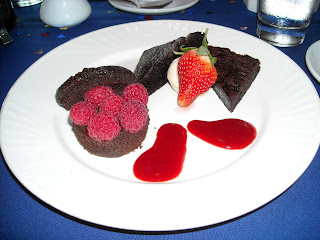 Dessert, the strawberry sauce was the most tasty thing!

Overall, I had really high hopes for this restaurant. It was ok. Hit or miss in my opinion. I’m not sure I’d do this again, as there are 2 TS credit restaurants that I find much better on property. Maybe in the future if the menu changes. Overall, a 6 out of 10 for the food, terrible service (I won’t even get into the horrible server we had–she kind of killed the night by her attitude) and inconsistencies.

Now that’s a skillet! The signature skillet at W

Another great bottle of @skywalker_vineyards Pinot

Breakfast to go from Kona cafe at Disney’s Polyn

Caturday is wild when you get a new kicker from @s

Animal Kingdom Lodge is one of my favorite Disney

Moving on up! The boys have upgraded their cat hou

A few gluten free highlights from the Epcot Festiv

Our welcome wines arrived from our @skywalker_vine

On this date last year, we were officially sailing

This might be one of my favorite magic bands! I lo

When your significant other gets you! @pikaroth su