Hear ye, Hear ye! Liberty Tree Tavern located in Disney’s Magic Kingdom provides traditional American fare in a colonial setting. With a rustic setting, you’ll feel like you’ve settled into colonial New England. One of the terrific things about this location is that gluten free & dairy free diners can enjoy a Pilgrim’s Feast of their own complete with gluten free gravy and dairy free mashed potatoes.

On this particular visit, I was attending the 2013 Mickey’s Not So Scary Halloween Party, and our tradition involves eating at Liberty Tree Tavern. For us, it’s convenient for the party (our family always makes an early dinner reservation, so we have plenty of time to enjoy MNSSHP) and filling. In fact, it’s my family’s go-to spot for both the Halloween party & Mickey’s Very Merry Christmas Party. It’s also a terrific location for Thanksgiving celebrations.

Our server said he was very familiar with GF/DF guests and that the chef would come out to assist. We did have a rather lengthy wait, and during that time our server brought over salad and said, “I know this is safe, so I’m bringing it to the table.” Now, Disney protocol does typically mean that the servers do not bring over food until a chef has cleared it. This guy seemed a wee bit bossy about the whole thing, and I just smiled & waited for the chef. I was pretty confident that they had not changed the salad dressing and that it would be safe, but I like to play it safe and wait to confirm with the chef. Once the chef came out, he did confirm that it was indeed safe. He also told me that they had the dairy free mashed potatoes ready, as well as the gluten free gravy. Our table actually asked for only gluten free gravy because they prefer it over the glutenous version! Chalk one up for GF gravy! He also said they had a variety of seasonal vegetables which they would also bring over.

First up, though were the salads and the GNI brand rolls. The rolls were heated fairly properly, so they weren’t bad. Of course, I smother them in Earth Balance & dip them in gravy. I’m fairly convinced the gravy would make anything taste good! But, really, these weren’t bad at all.

I have to say that the strawberry vinaigrette dressing here used to be amazing. It’s really declined in quality over the past few years–primarily seasoning and flavor-wise. It seems like the strawberry is very muted now and the flavors are just very bland. I wish they would just brighten this dressing back up to where it used to be. 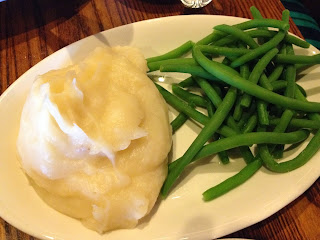 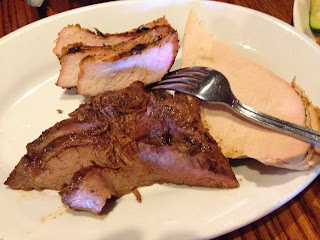 In terms of offerings, gluten free & dairy free diners get the dairy free mashed potatoes, steamed green beans, seasonal vegetables (more on that in a minute), and roast pork, roast turkey, and roast beef. I don’t eat the beef, but it does always seem a little rare and usually is the least eaten thing at our table. The roast pork is not bad – this version had a slightly rosemary seasoned taste to it – though I have to say I do miss the ham. The roast turkey breast is the big winner at our table as always, and it is very moist and flavorful. 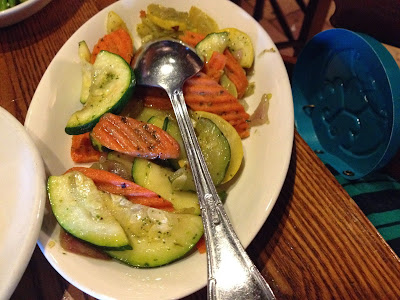 And now onto those seasonal veggies. I’ve been saying how most of the meal was under-seasoned, well this was the one exception. It was totally and utterly over-seasoned. Really salty and weirdly seasoned with some sort of almost Italian seasonings. It didn’t match the flavor profiles of any of the other components to the deal and was almost aggressively in its flavor. And I was so disappointed too because I adore squash and zucchini and had had an amazing version at a prior visit in the fall 2012. This was not my favorite. I’d like to see the simple sauteed version of this again. I also have to say Liberty Tree has a penchant for odd sides. The last visit, they had broccoli rabe with the meal. Broccoli rabe?! Totally doesn’t fit the theme! I’ll give the chefs kudos for branching out but not so much on the execution of these dishes. 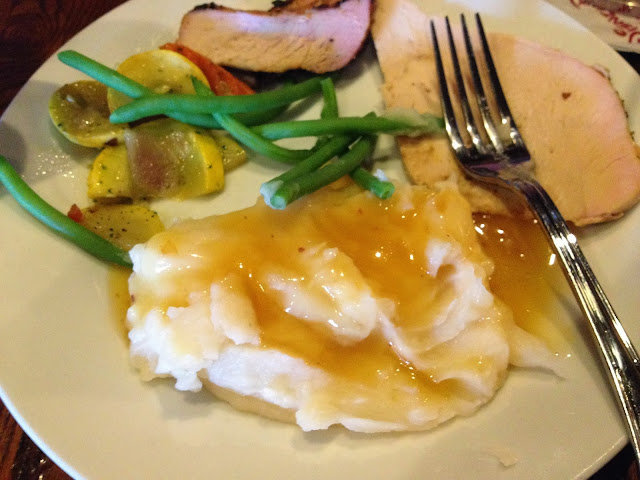 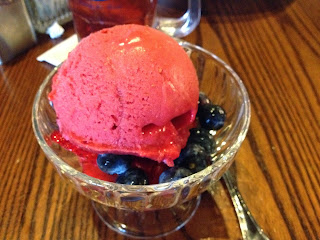 Dessert at Liberty Tree is always raspberry sorbet with fresh fruit for me. I don’t hate it, and I actually don’t mind it at the end of this meal because I’m always usually really full. But just once, in a dream world, I’d love to have a GF/DF cranberry Johnny Appleseed Cake!

Overall, I’d give this experience a 7 out of 10. While it has some nice offerings for GF/DF diners, there are a few things I’d love to see improved upon. Of course, it will always remain our holiday tradition at Disney but I do hope that they can work to make the options here just a little more special. That gluten free gravy though is the hands down winner of the meal!

Be Our Guest Restaurant Dinner Review