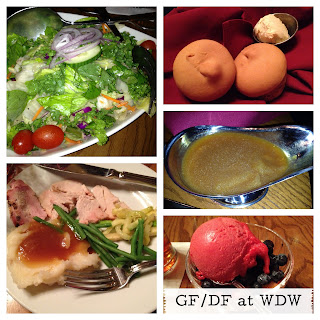 I was just recently at Liberty Tree Tavern for lunch, and here we are just a month later for dinner. Liberty Tree is my go-to place for all of the holiday parties. I always get ADRs to eat here and then it’s off to party! This year was no different for the Halloween Party. Of course, I was curious to see if there were any new changes to the rolls, as had heard there were some switches from Udi’s rolls (which oddly are the only Udi’s product that I’m not that excited about) to GNI brand rolls. I wanted to see if that had taken place. Plus, it’s been a while since I’ve had the full dinner there.

Upon arrival, I was greeted by the chef who gave me the rundown. Essentially, nothing had changed. I could have all of the meats (though I don’t eat beef), steamed vegetables, dairy free mashed potatoes, the salad without modifications, GF/DF rolls, Earth Balance vegan margarine and raspberry sorbet with fruit for dessert. Pretty standard, and I’ve eaten here enough that I knew the drill.

Up first was the salad and rolls. I was a bit underwhelmed by the salad, which I usually like a lot. I love the strawberry vinaigrette, but this time it wasn’t that great. It seemed like the salad was overly dressed and the dressing was under-seasoned.

Then the chef came out and dropped off the rolls, before I could even ask him what they were, he had high-tailed it out of there. Um, guess they were busy! I knew right away they weren’t Udi’s. They looked totally different, and had been heated up too. The texture seemed a little weird just by touching them. Upon adding the Earth Balance to it, I took a taste. I must say, the taste wasn’t terrible (sort of a sweet, brown rice flavored roll), but the texture was just plain weird. It was an odd mix of spongy (almost Ener-G like texture), but totally crumbly. Weird. I gave my mom a bite because she tends to really like GF/DF breads, but she really really did not like this. I didn’t think it was quite as bad as she did, but she hated the texture. Overall, it was OK, but not great. And the rolls sort of turned to hockey pucks as soon as they cooled down. Interesting. I haven’t encountered these rolls anywhere else, so I’ll be curious to see where they pop up and what others think. If it is GNI brand there is some cross contamination issues that are potential, but I didn’t hear any reports of this from the chefs. So, probably something to consider.

Then it was on to the main meal. As usual, nothing spectacular, but it was good. I liked the turkey and this year, they seemed to have changed the pork loin for the better. Last year, it had a cinnamonny sweet flavor, and a fruit compote. Not my favorite. This year, it was sage rubbed and much more appealing to me. The mashed potatoes were also very good this time. The steamed green beans were pretty boring, but the winner of this meal was the sauteed zucchini and squash. Wow, this was really good. I ate like half of our table’s plate (this was safe for everyone). Very very good. Thank you for adding this one LTT! The gravy was a good batch that night–sometimes it’s not as seasoned as it could be. Good enough in fact, that my family had to eat that instead of the “regular” gravy. We went through 2 gravy boats!

For dessert, I had the sorbet (they don’t have another GF/DF option). Overall, I found it to be pretty good. I like the sorbets they have on property, and quite frankly after a big meal, this is a nice dessert option.

Overall, I like LTT, but I’m glad I only go here a few times out of the year. I wish they could make a GF/DF dressing/stuffing, that I think would be a nice addition to this Thanksgiving-like meal. And bring the ham you guys! I miss it!!