Boma is one of my favorite Disney restaurants. It evokes visions of Africa with its variety of unique foods and luscious desserts. However, this was my first visit being GF/CF, so I wasn’t sure what to expect. We decided to go for breakfast. Upon arrival, I made sure that it our reservations had my dietary restrictions noted. Once seated, I mentioned this to our server (the servers did not seem very aware of the notations on the tickets, and I usually had to tell them) and she said she would get the chef. A few minutes later, the chef from my visit at the Mara (see that dining review post) and so I was a little apprehensive considering that last time he saw me he kept trying to give me things with dairy in it. When he came up, I reminded him that I am GF and CF. At first he kept saying GF only and I told “NO Dairy free too” finally he got it. The first thing he did was ask me what I wanted to eat. He said he would show me around the buffet and then make some separate things for me as well. He gave some suggestions (omelets, french toast, pancakes) and I jumped at the idea of french toast! So, we decided on french toast and an omelet with spinach, ham, and onions. Then he took me around the buffet line. I was surprised at how few options were really available on the actual buffet. This was mostly because of the dairy. They put dairy in a LOT of their items. However, I could eat the meats at the carving station (I had turkey and ham, so good!), potatoes with Afritude and that was about it. At the time I couldn’t have fresh fruit, but that was plentiful if you want it. They had Quinoa as well. I was bummed about the bobotie (my fav) but the chef did mention that he could make that GF/CF with notice, but I think you would have to call at least 24 hours in advance. I missed the baked goods but the chef did say he could bring me Muffins and donuts, but I didn’t really have the room. Here’s a photo of my omelet and french toast: 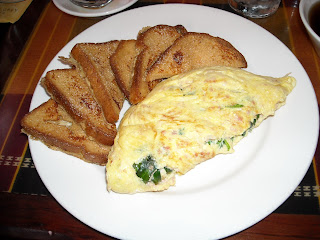 I couldn’t eat all of it! I did end up taking some of the french toast back to the room and ate it another day. It wasn’t quite as tasty 2 days later, but still good. Overall, I’d give this a 8 out of 10 mostly due to the lack of items on the buffet. But, they can still accommodate dietary restrictions pretty well.