I always love trying new restaurants at Walt Disney World. Even though I go to WDW a lot, I still haven’t eaten at every restaurant on property, so it’s always nice when I get to check out a new location. On this particular trip, I was heading to Hollywood Studios and I wanted to go to someplace close to the park. For someplace different, we decided to head to Captain’s Grille, since it was centrally located.

When we arrived, we noticed the restaurant was a bit quiet (8:30am), but we liked that. In fact, the quiet, calm location that day made for a nice meal. I like finding quieter locations for those days I’m not wanting a calmer experience (I admit, I have to psych myself up for morning character meals!). In looking at the menu, it seemed we had a variety of choices from a breakfast buffet ($18.99) to a la carte items.

When the chef arrived at the table, he asked more about what I wanted. The only thing he offered to make was the allergy friendly Mickey waffles. He said they use Bob’s Red Mill mix, so I asked for those. I also inquired about Udi’s toast (which they had) and Earth Balance (they also had). The eggs he would make in the back because the buffet eggs all had dairy in them. I asked about muffins and he said that they could add a breakfast muffin (they make them in house). So, ultimately, I decided on a “buffet” style option in which I had everything made in the back, except the breakfast meats which the chef said were safe on the buffet (and thankfully, located all next to each other) and the fruit.

First up was the fruit. I really enjoyed this, as it tasted really fresh. It’s strawberry season here in Florida, so it was nice to see these. The pineapple was also really good.

Next up were the muffins. I only asked for 1 muffin, so I was surprised to see 3 come to the table. That’s a lot of muffins! Interestingly enough, they were made with Namaste mix (which was the base for the desserts at the 1st Annual Special Diets Dessert Party). The chocolate muffin tasted like chocolate cake (who says you can’t have dessert for breakfast?!), the spice muffins was the Namaste spice cake mix (I make it at home, so I recognized it immediately), but the real winner for me was the banana muffin. This was a great breakfast item. Of course, they probably try to keep these very allergy friendly but I would love to have this version with nuts in it. 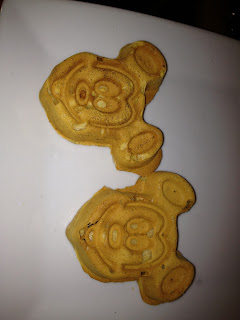 Next up was the most disappointing part of the meal–the Mickey waffles. Now, I’ve only had one other experience where the Mickey waffles were really bad, so I was really surprised to have this experience. It wasn’t the taste that was bad, but the texture/density. If you’re a baker you will relate to this–it was like they were dead-baked. They were extremely dense and dry. I think they used too little liquid and too much pancake mix. Yuck. I shared them with my family and they also agreed–taste was fine, texture was weird. I did eat one, but I couldn’t eat the second one–I just found the texture to be very unappealing. Not sure I’d get these again here, not with the muffin option. They did mention that they can also make pancakes, so I wonder if they would be more appealing texture wise than the waffles.

I also had the plate of eggs with toast & Earth Balance. The eggs weren’t anything to write home about. Boring basic scrambled eggs, underseasoned. The toast was really toasted, which was OK by me, but if you have preferences on toast level, you might want to tell the chef.

Lastly were the breakfast meats. Ham, turkey sausage and bacon. The turkey sausage was like a smoked sausage/kielbasa. It was nice to see some variety at breakfast–they also had turkey bacon. The bacon was the normal Disney stringy bacon. The ham was not my favorite. It was a sweet slice ham (I prefer a more savory/salty ham) and dry.

Overall, I would come back to Captain’s Grille, but perhaps only order a la carte and not the buffet. I’ve had much better buffet experiences that included more variety and better quality food in my opinion. That’s not to say this wasn’t a decent breakfast, it was. But, it was more mediocre compared to some of my favorite restaurants on property. I would come back again but it wouldn’t probably be my first choice of breakfast locations. I’d be curious to give it a try for dinner or lunch sometime.

A 7 out of 10 for the experience. Nothing special, but a pleasant atmosphere. Pass on the Mickey waffles.