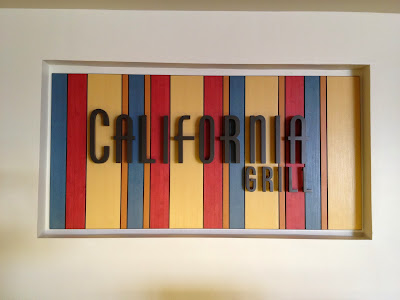 Set atop the top floor of the Contemporary Resort, California Grill offers guests not only an amazing view of the Magic Kingdom but also a taste of culinary and seasonal offerings. Long hailed as one of the best places to dine on property, it was with great fanfare that this location went down for a lengthy refurbishment this past year. Having re-opened early this fall, many guests have been flocking to California Grill to see the new decor and taste items from the new menu. I finally was able to dine at this location after much anticipation.

If you have read my past blog posts, you’ll recall that I had my 30th birthday celebration dinner at California Grill. I adored the sea bass dish that I had, as well as the sushi (which California Grill is renowned for). I also had one of my favorite desserts there–a custom chocolate cake with non-dairy chocolate mousse and raspberry coulis. See that full review HERE. So, it was with great expectations that I went into this meal experience. It also happened to be my brother’s 30th birthday meal celebration with friends & family, so it was an extra special night.

The first thing to know when you head to California Grill is that the main check-in is located on the 2nd floor of the Contemporary Resort. From there, you receive a pager and are taken by a cast member to the top floor of the resort to the restaurant. Once there, you can either spend time in the lounge enjoying a cocktail or wait for your seat to be ready. Our pager happened to go off while we were in the elevator, so we were seated quickly. It was also an early reservation 5:20 and the restaurant was not very busy yet.

It was exciting to see the changes made to the restaurant. I like the wide openness of it and the new bright colors. It is said to be Mary Blair inspired (Mary Blair is a prominent Disney artist; you can see her touches all throughout the Contemporary Resort – including the large mural by the monorail – and by her work on rides like “It’s a Small World.”). Overall, it was a very big redesign. Everything is very streamlined and chic. 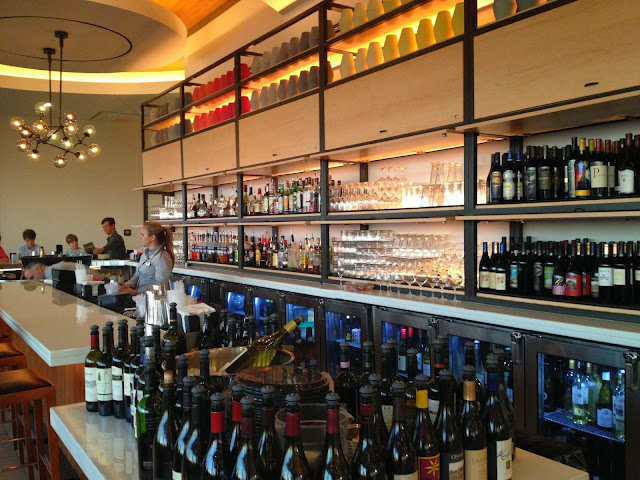 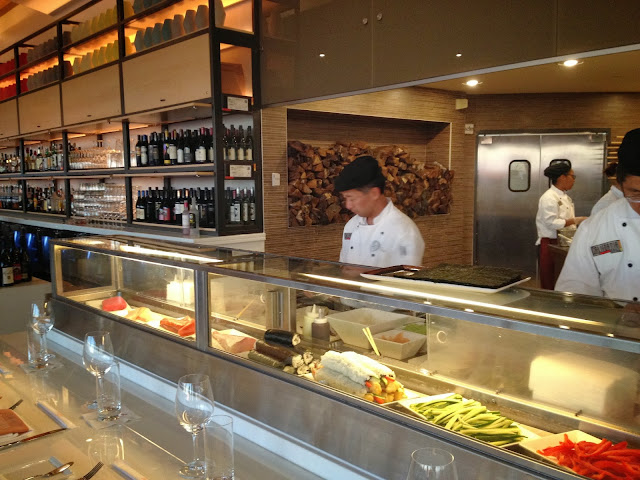 We had a large party (9) and were seated against one of the walls with a nice view of Walt Disney property. It’s really impressive, especially as it gets darker! One of the new things I noticed was that there were iced containers located next to various groups of tables. This turned out to be where they serving their “house water” and keeping it here to chill. Someone posted that they use super purified water that is filtered 5 times. Our server didn’t say, but it came out in big glass bottles that were then poured into our glasses.

Speaking of our server, I have to say she was particularly unpleasant. I had been hearing some horror stories about the new California Grill staff and I have to say that unfortunately she lived up to those stories. She kept skipping over certain people at our table for drinks and was very grumpy. She seemed really grumpy after our orders and it only went downhill from there. Now our group was a family based one – we also had two children with us, one was 9 and the other was 11. As far as kids go, these two are extremely well-mannered and well-behaved. They are very polite and never fussed at the meal. They were also very engaging with the server which seemed to be off-putting to her. The kids certainly didn’t notice but I was disappointed by her general lack of niceties. (*Note: at the time of day there were a lot of families with kids around in the restaurant).

I was given a special diets sushi menu. This is kinda cool! It was nice to see that they gave some options right away for guests interested in sushi. It wasn’t the clearest special diets menu I’ve ever seen but at least it was something. I was surprised then to learn that they didn’t have any special dietary menu (some locations do this for ease for the guests & servers).

When I started to talk about my special diet with the server her response was “We DO NOT bring the chef out.” and that she would be working with me on this. I mentioned that I did not feel comfortable with this given Disney’s policy is that chefs or managers consult with guests who have a special diet. This turned into the “We’re not a typical Disney restaurant therefore the same rules do not apply” conservation began. Still, I insisted that I talk to a chef. When one came out, he seemed like this is not something they normally do (again, surprise on my end). He basically wouldn’t give me any ideas of what to order for any portion of the meal, except dessert (I’ll get to that in a minute). He said that they would “just substitute” whatever needed to be substituted. It was really quite strange overall. It was almost edging on the experience I had once at Jiko (which I have hailed as the worst dining experience I’ve ever had on property…see that HERE). But, I was optimistic. For dessert, the chef said my option was a pomegranate lime sorbet with fresh & seasonal fruits (he suggested pears). He did not take my order but rather told me that I would need to tell the server and they would coordinate. Again, this was feeling very strange given Disney’s normal procedures.

Meanwhile, the server brought out the GNI brand rolls with extra virgin olive oil. Nothing really special to report on these. These were the same old rolls I get most places. Luckily, they did heat them properly.

I decided to order the Bell & Evans Chicken which normally comes with mashed yukon gold potatoes, Braised Lacinato Kale, Caramelized Onion Jus. Mine came out with smashed sweet potatoes and the other accompaniments. It also had some type of mild chicken sausage patty on the bottom (imagine my surprise when I discovered it!). The chicken itself was encrusted with spices (and was skin on) including fresh sage. There was only one bone included in the piece of chicken and the remaining portion was boneless (much easier to cut that way but ensures that flavor).


When I first bit into the chicken, I assumed the crust had some type of breading to it and I just wanted to confirm that it was safe. The server again did not want to get the chef and said that it was safe. “Just trust me.” Clearly, she doesn’t know what it’s like to live with a special diet. Once I felt safe eating the dish, I found it to be delicious. It was very flavorful with a rich complexity that you don’t often see in many dishes outside of signature dining locations. The chicken itself was perfectly cooked and the seasonings were outstanding. The kale was delicious and well sauteed as were the onions. The mashed sweet potatoes were good and complimented the dish, though I think the yukon golds would have been better.

In general, everyone seemed very pleased with their meal choices which ranged from the filet of beef to the pork two ways to sushi and flatbreads. I think the only dish that seemed to be less than well received was the three-meat signature meatball dish.

I decided to forgo sushi this time or another appetizer for the dessert, as the sorbet sounded intriguing and even more intriguing with the fruit. The server basically said gluten & dairy free options are fresh fruit or this sorbet only. When it arrived, I was very disappointed that 1) it didn’t have any fruit with it as the chef had mentioned and 2) that it was literally just scoops of sorbet (and not pretty scoops either). I was just a wee bit shocked given that many restaurants that are not signature dining locations go out of their way to make visually appealing presentations even just of sorbet.

Just so you can see for comparison how many of the other desserts looked like, here’s a non special diets dessert….


Taste-wise, the sorbet was good. It was very limey and I enjoyed it a lot. But, it was also really sweet. It needed some other taste profile to counter-balance the extreme sweetness.


As far as the meal went, I enjoyed the food that I did eat very much. I thought the entree was really excellent and I almost wish I would have gone for sushi instead of the dessert option. As my brother put it, food was terrific, service was terrible. I’m hoping that this location is working on improving this, as I keep hearing very consistent feedback from others indicating the same disappointments service wise. I’m also still very disappointed by the chef and servers lack of concern and/or communication with me about special diets options. They really made me feel like an after-thought and that I was putting them out at this meal. It’s not something that I normally get at Disney, and quite honestly it will likely deter me from heading to California Grill for a while. I can easily head to so many of my favorite places that have just as high quality offerings but better service overall. It’s a gorgeous location and terrific for special occasions but if this is their special diets accommodation, I personally would go elsewhere.

I’d rate this particular experience the following: food here an 8 (it lost a point for me because of the dessert, but would otherwise have been a 9) and 6 for the lousy service.

Have you been to California Grill yet since the location re-opened? How as your experience?

Around the world in 80 restaurants California Grill Contemporary Dinner
Share: