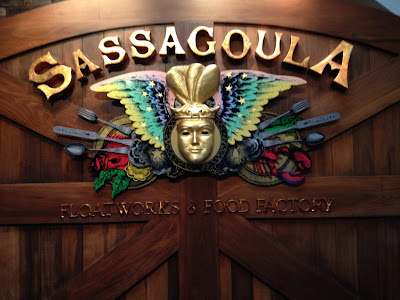 There’s nothing like a beignet. Deep fried and smothered in powdered sugar, it’s a confectionery delight! And any proper N’awlins experience wouldn’t be complete without one. But what if you’re gluten free, dairy free or even egg free and soy free? Luckily for guests at WDW, they can experience this treat even with a special diet! Back in May, a blog reader emailed me to tell me that they were able to get special diets beignets at Port Orleans French Quarter (POFQ) at Sassagoula Floatworks & Food Factory. You know that meant I needed to investigate and try them out for myself.

The first thing I did was contact the WDW Special Diets Department. They let me know that you can indeed get these beignets with advance notice. At first, they only noted that they were gluten free, but after further investigation revealed that they were also dairy, egg, and soy free–making them vegetarian and vegan friendly. I asked Special Diets to let POFQ know that I would be arriving about a week in advance; however, I didn’t actually hear from them until 1 day before I went to confirm. I would recommend arranging this well in advance because as I learned later, there were some miscommunications that occurred partially due to my last minute request.

When I arrived at POFQ, we headed to Sassagoula Floatworks & Food Factory. Like many QS locations at resorts, they have various food stations (such as the Po’Boy station, Pizza station, etc.). Since the beignets were prepared at the Bakery station, I inquired there about the chef. Once the chef came up, I explained that I had emailed ahead of time for the beignets. He said that they were told by Special Diets that I was coming in the morning and had a dedicated fryer with hot oil running for part of the day but had shut it off because they assumed I wasn’t coming. I felt bad there was some confusion, as I had noted lunch or dinner time and visited at 5 p.m. I told the chef that I understood if he couldn’t make it happen that night, but he was very obliging and agreed to make them. He said it would just take a bit.

While we were chatting I mentioned that I had a friend who was vegan who might want to try them and wondered what the ingredients were. He didn’t bring out the ingredients but he did say they were vegan. In fact, they sounded a bit like the ingredients for the allergy Mickey waffles! He said they used Bob’s Red Mill Pancake Mix, rice flour, applesauce and he thought apple juice and cinnamon. As I mentioned before, they do use a dedicated fryer and they seem to only use it when special requests are made.

While we waited, we checked out the layout. I will say that I really like this resort. It’s really small but has a great vibe to it. Very mardi gras like!

The chef gave me a pager so that we could wait at the tables and then come back to pick up the beignets. Once I got them, I was super excited to try them. I also told the chef that I would come back the next day because he said that they had several orders the next day, so to stop by.

The first thing I noticed about these, is that they are smothered in powdered sugar. You will be on a sugar high once you eat these (and also, if you are vegan you’ll need to confirm the powdered sugar ingredients to confirm they are safe). The other thing is that they aren’t quite as light as “regular” beignets. But that being said, they were delicious. Like a little deep fried donut. And so often allergy friendly donuts are not deep fried, so this was amazing. I will say, they weren’t as hot as I expected, but it didn’t stop me from scarfing them down. The taste is very very similar to the allergy Mickey waffles. (oh, if someone could deep fry an allergy Mickey waffle, I bet they would!)

So, the next day I stopped back again for the beignets. This time it was about 3 p.m. The chef was a little busy because the regular deep fryers for the beignets out front went down and there were a couple of other kitchen crises, so he was very distracted. But, he said they had the fryer ready and that he’d have them ready for me. He was in such a hurry, he did not give me a pager, and I waited for a while out by the stations. Once they were ready, he brought them out. This time I scored 4 beignets because he said the oil wasn’t as hot as he liked it to be, so he wanted to give me an extra one. That’s ok by me!!

Oh my, these were glorious!! Super piping hot and crispy. I don’t know why he said they wouldn’t be as good, but I thought they were better the second time around. Lots of powdered sugar deep fried deliciousness! Because they were so hot, I really had time to savor each bite. As I mentioned, they aren’t quite as light and fluffy and are a little chewy, but hey…deep fried beignets are deep friend beignets! These would go great with a nice cup of coffee in the morning.

One other great thing about this location is that they take Tables in Wonderland here, which means 20% off your ticket for food and beverage. That meant my beignets were only $2.55 for a serving. Not too shabby.

Overall, I can’t say enough good things about the beignets themselves. They were quite delicious and a nice rare treat. I wouldn’t do this all the time, but definitely on special occasions. Make sure you get a hold of Special Diets well in advance to arrange these and it is a good idea to check in with the restaurant, especially if you are staying there at the resort itself.

For me, I’d give this a solid 7 out of 10! Head over there to check these out and let me know what you think!

Have you been to Sassagoula Floatworks & Food Factory for the allergy friendly beignets? What did you think?

A totally different type of gluten free roll was o

Eye spy! An artistic, up close shot of Cactus cour

A simple but tasty salad from Hollywood & Vine in

Terrible photo but a surprise dinner hit from Holl

A massive amount of tasty food from @yakandyeti_di

The Wave at Disney Contemporary Resort always has

If you can have dairy, the crispy cheddar burger f

Wow! @pikaroth and I were blown away by the @skywa

Just a little purrito aka Wyatt to brighten your d

A few gluten free bakes from the holiday weekend.

Fondue is always a the best. We finally made it ba

Happy Caturday from a very spunky Wyatt! 🦁He ca

Gotta love a fresh salad! 🥗 The salad from Gard

A great entree modified to be gluten free from San