It’s a blast from the past…50’s Prime Time Cafe. It feels like I was just there hanging out with all of my favorite “cousins.” Oh wait, I was just there not that long ago!! This review is a combination of two meals that I had in the past month at 50’s PT. They are important to share because of what I was served that was different from my normal order of fried chicken and mashed potatoes. So here we go. Let’s do the time warp again… 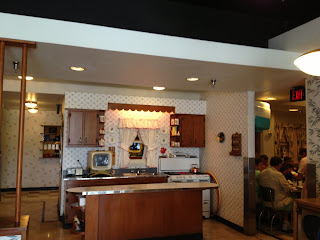 On these particular trips, I contacted the chefs at 50’s PT ahead of time to order the GF/DF/SF fried chicken and GF/DF mashed potatoes with GF/DF gravy as a part of the “Mom’s Sampler” menu item. I had been told that the meatloaf was GF/DF and was a combination of pork and beef. Now I don’t normally eat beef, so this was a gamble for me (beef and I don’t get along too well). I normally eat like one hamburger or two a year, so this was going to probably be my threshold for a long time. But I really wanted to try it and was hopeful that it wouldn’t settle too badly. I weirdly don’t too as badly with ground pork, so I was hoping the mix would also deflect some of the potential tummy ache.

Upon arrival, I was greeted by Chef Eddie who was very busy helping others, including a table next to us who hadn’t noted their child’s allergies and were having difficulty with the child finding anything they wanted. Poor kid only wanted Mickey waffles lol When I told him that I contacted them ahead of time he remarked, “Oh you’re the lady!” Guess my reputation proceeds me 🙂 He said he had everything ready and raring to go. When the dish came out, I noticed the pot roast was on it. (which normally comes with the Mom’s Sampler) I didn’t really think about it at first but then I remembered that some blog readers mentioned it was not safe. Yikes!! I think I had taken 2 very small bites before I remembered that. Uggh. I tried to flag down Chef Eddie but he was slammed, so I decided to email when I got home and eat nowhere near the pot roast just to be safe since I couldn’t confirm it’s safety. The fried chicken was definitely gluten free and the meatloaf was just ground meat from what I could tell. Also, I really REALLY disliked the meatloaf. Like, I won’t ever order it again meatloaf. Yuck. It tasted like sausage! And not even good sausage. My stepdad is from Sweden and he said that they must use allspice in their recipe because that’s what it tasted like to him. Either way, it wasn’t a personal winner for me. I liked the texture of it though, but that is not a redeeming enough quality for me to order it again.

The mashed potatoes were really good–and they gave me an extra portion (which I didn’t eat half of anyways due to proximity of the pot roast)–I think they know I love the carbs! The veggies were also good and it was nice to have the green beans & carrots AND the collards (my favorite). On a side note, they somehow forgot my gravy which got brought to me a little later in the meal.

For my dessert, I ordered the gluten free/dairy free brownie with rice dream and chocolate syrup. Only I got hot fudge sauce. Yup, I knew right away before I even ate it that it was hot fudge sauce. Yikes. So, I wasn’t feeling overly confident with this meal, and 50’s PT has always been exceptional with the allergy service.

Once I returned home, I contacted the restaurant and sure enough they should NOT have given me the pot roast. It contains trace amounts of gluten according to Chef Brandon (who’s over at Hollywood & Vine now). He assured me that they would make sure this did not happen again. How scary. This is probably one of the first most blatant near glutenized moments I’ve ever had at Disney. I was glad I had some knowledge and only ended up with a slight stomach ache, but still–this could have been disastrous for someone else. It just goes to show that you can never be too vigilant and even when you think you are safe mistakes can happen. As I learned from my next visit, this was turning into a common theme….

My next visit fared a little better, but still had some bumps in the visit that made me want to wait for a while before I go back again. Once again I emailed beforehand confirming that I really only wanted the chicken and mashed potatoes and gravy. Forget that other stuff! This time I wanted to stick with what was tried and true.

I was once again greeted by Chef Eddie. This time, he said that they were ready for me, but then he asked if I really wanted mashed potatoes. Uh-oh, I see where this is going…someone didn’t get the potatoes ready. He said that it’s not so much that they didn’t have them ready but that I should really try something different. huh? He said he could still make the potatoes but that it would take some time and didn’t I really want to try something like the sweet potato mash that they have with their seasonal fish? Sigh. Now, I’m not really that picky so rather than go in circles with him (which we sort of did), I said fine. But really…mashed sweet potatoes with coconut milk doesn’t seem like it would go w/fried chicken and collard greens, but maybe it’s just me?! He actually wanted me to try the broccolini too which I opposed. I really love those collards and didn’t want to miss out. Some of the discussion that he and I had is actually why I email ahead of time. If you know you want the fried chicken and mashed potatoes and gravy, it’s easier for everyone involved to notify them ahead of time. But clearly, they just forgot it because it did take a while (more than normal) to get the food.

While we were waiting, Chef Eddie actually came back and asked if I still wanted gravy. Now, for the life of me I can’t figure out why they would have gone to the trouble of making gravy and not the potatoes. But never mind–too little too late. Once the dinner came out I dug in. The chicken was delicious as usual. The one good thing is that he did give me two chicken breasts which was great. The collards were excellent as well. Now onto the sweet potatoes. Now don’t get me wrong–they were very good. They would have been excellent with the new seasonal fish dish (mahi mahi) but for the rest of the meal–a little weird. I gave my family samples to try and they mostly liked the flavor but everyone said it did not go well with fried chicken. Yep, that’s why I ordered mashed potatoes ahead of time!

Then it was on to dessert. I ordered the same thing as the time before–the allergy brownie sundae. But this time, I made sure to specify no hot fudge sauce and told the server why and to make sure they didn’t do the same thing as the time before. I truly had thought the time before was that our server must had put the fudge on (b/c she was very frazzled) and that it wouldn’t happen this time, but now I’m convinced it was a kitchen issue because sure enough….hot fudge. Sighs…what is going on with my 50’s PT?! Well, back to the kitchen it went. And when it came out, I had extra syrup. I guess they really wanted to prove a point that it was syrup! lol

Overall, I was pretty disappointed with both of these dining experiences primarily because someone could have gotten extremely sick. Had I consumed more than two bites of pot roast I would have been violently ill and probably out of commission for days. As it was my stomach was a disaster for a day or two though at least I was functional. On top of that the dairy consumption would have been equally bad and life threatening for someone highly allergic. What concerns me is that the hot fudge situation happened twice. Once I could have chocked it up to user error, but twice? That’s a pattern of non-allergy attention. I understand that the kitchens are busy and that it happens. But I try to do due diligence by contacting them ahead of time to help make their lives and mine easier. This just was a little bit of a back slide for me with 50’s PT.

On a side note, I saw Chef Frank as I left and I wish I had had a chance to work with him. He’s always been really great and I haven’t had any problems when he’s handled my meals. Chef Eddie seems like a really nice guy and he seemed like he wanted to try to accommodate but someone there were too many errors to make me feel overly confident in him right now.

I plan on waiting a few months before I head back there to try it again. I think I need a break and hopefully, in the meantime they will improve their procedures so nothing like this happens again.

Normally, I’d give this a 9 out of 10, but these two experiences were about a 6 for me in terms of major issues.

What have your experiences at 50’s Prime Time been?