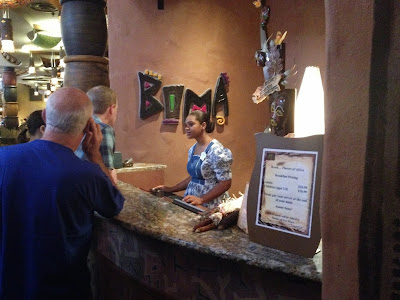 Boma: Flavors of Afirca located in Disney’s Animal Kingdom Lodge – Jambo House – is probably one of my most favorite breakfast buffets on property. With African inspired cuisine, Boma offers traditional breakfast offerings and dishes with a twist. Not surprisingly, this location can also easily accommodate guests with special diets offering options like allergy Mickey waffles, custom omelets, and more.

On this particular visit, I was celebrating the completion of the Jingle Jungle 5K at Disney’s Animal Kingdom. This runDisney race took place early that morning, and I wanted to celebrate my race accomplishment with a nice hearty breakfast. My family happened to be staying at Disney’s Animal Kingdom Lodge – Kidani Village, and this seemed like the perfect place to celebrate! I can tell you that many other guests also decided to visit Boma too to celebrate because it was packed and also packed with fellow racers!

Our server let us know that the chef would be coming out to greet me, and based on her description, I assumed it was Chef Chris whom I’ve met a lot at Boma; however, I was greeted by Chef Vickie who was also helping out that morning (I did see Chef Chris in the kitchen though). She took me through the buffet and showed me the items that were safe. These included: grilled asparagus (my favorite), chakalaka, grilled tomatoes (no pap this time–they used butter in it that day! boo!!), carved ham, quinoa, custom omelets, breakfast potatoes, bacon and sausage, and fruit. In addition, they can usually make whatever your heart’s content is in the back, and that morning I asked for: Allergy Friendly Mickey Waffles, Custom omelet with ham & onions, and breakfast pastries that are GF/DF (they typically carry Udi’s and Kinnikinnick on hand).

While Chef Vickie was preparing my dishes in the back, I ran the buffet for the few safe items I was interested in. Boy, the buffet line was huge! I snagged: grilled asparagus, ham, quinoa, breakfast potatoes, bacon, and fruit. I also got to enjoy the Jungle Juice which is the fruit juice they serve at the buffet. It’s pretty sweet and not something I’d normally drink every morning, but it really hit the spot post-race! It’s a mix of orange juice, passion fruit juice, and mango juice! Yum! 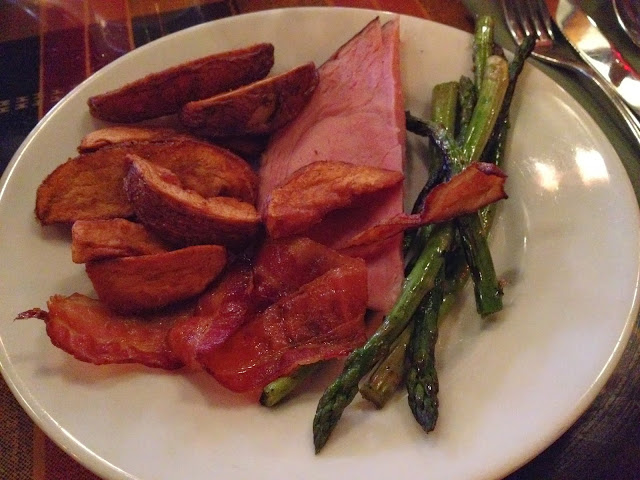 First up was the buffet options. I adore and I mean adore the grilled asparagus. It is so good. Even when it’s not the most seasonal asparagus, it’s still delicious. The open oak grilled fires really impart a lovely grill flavor. I always make sure to grab a bunch of the asparagus. The ham was also really good, though the piece I had was a wee bit fatty. The breakfast potatoes were really well seasoned that morning which was good because they have been a little under-seasoned in the past. The bacon was just the same old stringy Disney bacon. 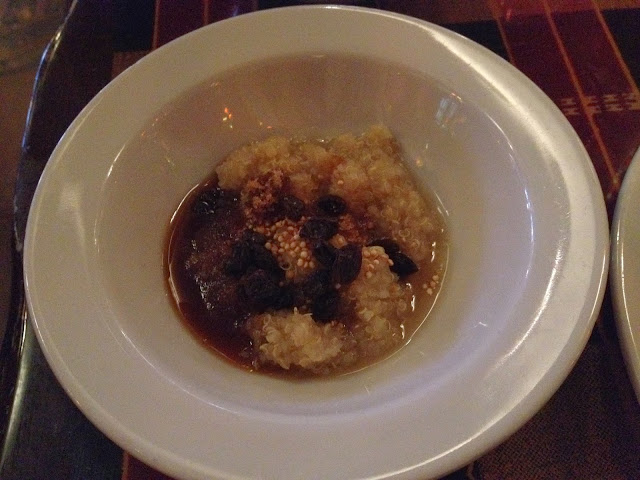 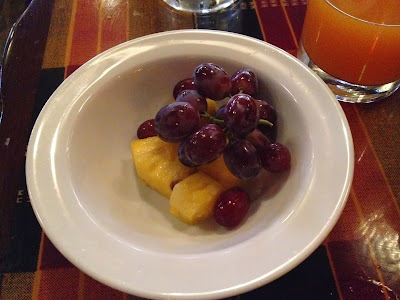 I also really enjoy the fruit at Boma. For some reason their pineapple is some of the best on property. It’s a hands down must for me whenever I visit. 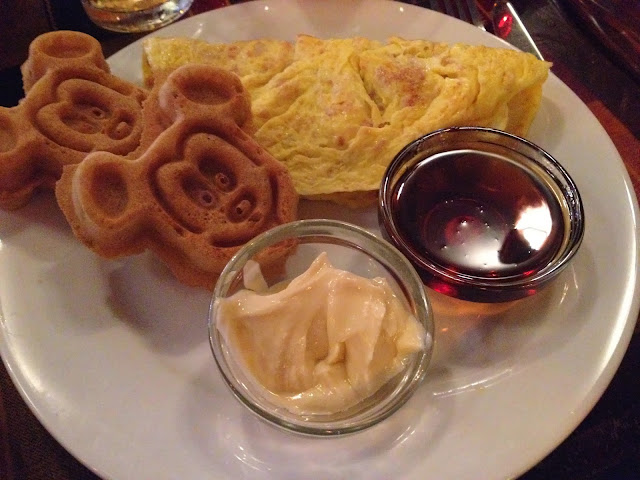 Now up for the items made in the back. The first was my omelet and Mickey waffles. The omelets at Boma are always really good. I very much like the ham that they use in the omelet–it’s minced extra fine and so you get ham in every bite! This time the onions were really not finely chopped at all (which they usually are), so it was a little onion heavy. Otherwise though, great as usual. Now the waffles are good here — not as good as Kona or Kouzzina but good. I asked for Earth Balance but I did not get served Earth Balance. We tasted it (yes, the whole table test-tasted it) and determined it was some type of margarine (my guess is smart balance–which is supposed to be dairy free now). I actually skipped this one and just ate the waffles smothered in syrup. Nothing wrong with that!!

Let’s just say I totally pigged out at this breakfast! It ended up being my meal of the day! As you can see, I got a lot of great breakfast options and many of them were prepared in the back to ensure safety and minimized cross contamination risks. It was great to really celebrate my race accomplishments at this location and especially with fellow racers.

Overall, I’d give this a solid 8 out of 10 for this visit. Our server was a bit non-existent which was a bit of a bummer and the crowds were higher than normal but overall, it was a terrific meal — one I wouldn’t hesitate to go back to for breakfast again. It’s also a fairly reasonably priced buffet – $18.99 (character breakfast are typically around $23.99 or more!) and I definitely ate a lot of food! A great post-race choice!